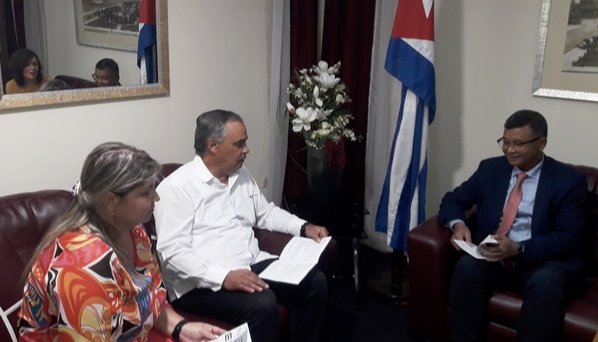 Havana, September 22 (JIT) - Cambodia's Minister of Education, Youth and Sports, Hang Chuon Naron, is visiting Cuba at the head of a high-level delegation of his country.

As head of sports of his country, Naron brings the purpose of promoting exchanges with the island in this area.

In statements to JIT, Chuon Naron expressed interest in strengthening sports cooperation, since next year his nation will host the Southeast Asian Games. Therefore, they will request to extend Cuban support in the preparation of their athletes.

"We have Cuban advice in our country with a boxing coach and two volleyball coaches, but we need to expand cooperation in other areas and Cuba can help because it has very good results in the international arena," he noted.

Vento commented that hosting a multi-sport games for the first time means a very serious commitment, especially if 35 sports will be competed in and each country will be able to bring as many athletes as it wishes.

"We are going to work together so that Cambodia can obtain its best historical result in these games. Count on the full support of the Cuban Sports Movement to achieve that goal," he said.

During his stay in Havana, which will end next Friday, Naron will hold working meetings with the head of Inder and with Roberto Leon Richards, president of the Cuban Olympic Committee.

He will also visit the Cuban Sports Research Center, the Manuel Fajardo University of Physical Culture and Sports Sciences and the National Volleyball School, among other activities.