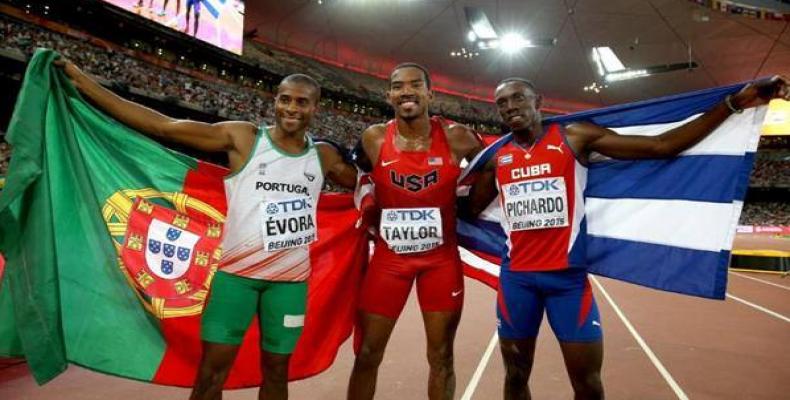 Let's Take a look at some highlights we learned on Thursday at the IAAF World Championships, Beijing 2015:

It's hard to predict when athletes like Taylor and Pichardo will put together another series like this one, but as long as they maintain a rivalry – every time the pair meets, could be a potential record scenario.

Pichardo's mark would have won many World Championships, but for Pichardo it might even have been an under-performance; the young Cuban is the fourth-longest triple jumper ever.

The 200m duel between Jamaica’s defending champion Usain Bolt and American Justin Gatlin was the highlight of the day on Thursday.

After Bolt won the 100m, even with Gatlin not having a perfect race there, it was clear that the 200m was going to be even harder for 33-year-old Gatlin to win.

Despite his world records in the 100m, 29-year-old Bolt has been a 200m specialist since he was 15 years old. That experience showed through the rounds, and in the semi-finals he had shown the same kind of power and pace from his best races.

With the athletes emerging on to the track from the tunnel behind the 100m start, the Chinese crowd roared in delight upon seeing Bolt jogging towards the 200m start. The Jamaican had won three consecutive world titles in this event between 2009 and 2013, but his winning margins had shortened.

Looking every bit back to his dominant best, there was no way that anyone would have beaten him tonight. He powered home to win in a world-leading 19.55, his fastest time since the 2012 Olympic final. He clearly had something to spare, too, as he was smiling through the last 20 meters of the race.

It was the fifth fastest time of his career and 0.19 faster than Gatlin’s 19.74 in second place.

Once again, as in the 100m, Gatlin failed to match his best result of the season, the 19.57 he ran to win the U.S. title in June. It was Gatlin’s second silver medal at these championships and his fourth silver overall at the World Championships.

Anaso Jobodwana, appearing in his third straight global championships final, took the bronze medal in a national record of 19.87 for South Africa.

There are a million and one different ways of running the 400m and Allyson Felix produced one slightly unusual, but highly effective, version which proved golden inside an electric Bird’s Nest stadium on Thursday.

The versatile U.S. sprinter claimed a 400m title – to add to her enormous cache of gold medals earned on the world stage in the 200m, 4x100m and 4x400m – with an utterly destructive piece of one-lap running to stop the clock in a world leading 49.26.

Behind her, rising star Shaunae Miller of The Bahamas finished strongly to grab a deserved silver medal in a personal best of 49.67 with Shericka Jackson leading home a quartet of Jamaicans to take the final podium position in a lifetime best of 49.99.

When world record-holder Anita Wlodarczyk from Poland sent her hammer flying out to 78.52m in round two, the competition for the gold medal was effectively over. From then on, the contest was between the Pole and the measuring device.

At the start of this month, Anita had broken her own world record with 81.08m, becoming the first woman to throw beyond 80 meters. That, combined with her winning streak of 16 competitions coming into Beijing, meant that her confidence was at an all-time high.

In the third round, she produced the second-best throw of her career – and her second 80-meter effort – with a championship record of 80.27m.

Much to the delight of the home crowd, China’s Zhang Wenxiu was the best of the rest. After opening with 73.47m, she improved to 75.92m in round two to move into second place, overtaking France’s Alexandra Tavernier, who had thrown 74.02m in the first round.