Faculty of Tourism graduates at University of Havana 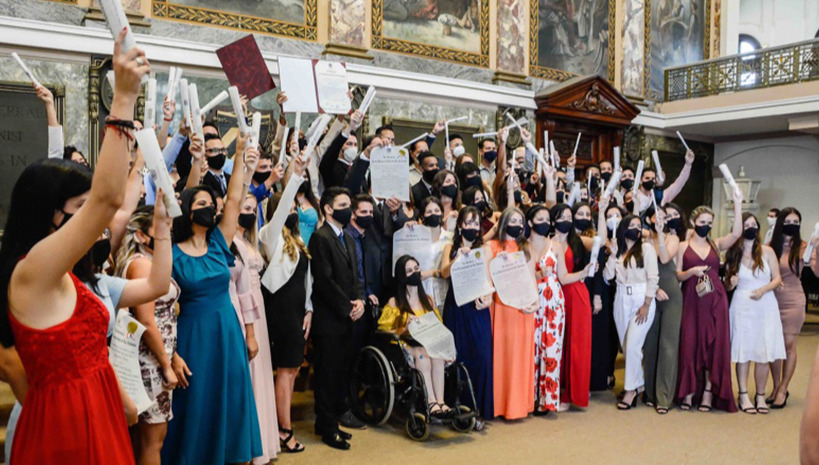 Havana, December 9 (RHC)-- Nearly 150 graduates of the Faculty of Tourism of the University of Havana in the 2019-2020 school year received their degrees last Monday in the Aula Magna of the almost three-hundred-year-old house of higher learning, the oldest in Cuba.

On the same day, the 13th and 14th graduations of the Faculty took place: the last for the D study plan and the first for E, in that order.  Both graduations honored the 62nd anniversary of the triumph of the Cuban Revolution, which will be celebrated on January 1st.

During the graduation ceremonies, the best graduates were also recognized -- the most outstanding in spheres such as teaching, research, culture and sports, as well as recipients of the Gold Titles and Awards for Scientific Merit.

Pedro Pablo Milián Fonseca was not only the best graduate of the Faculty but the most prominent of the entire University in the field of Research, as well as the one deserving the distinction granted by the University Student Federation in that educational institution.  He referred, on behalf of his colleagues, to those five years of dreams, efforts, learning and achievements to which they say goodbye to begin another stage of their lives,

The young man, also receiving a Gold Title and Prize for Scientific Merit, highlighted everyone's commitment to putting into practice what they have learned in the classroom and contributing to the recovery of an essential sector for the development of the Cuban economy.  He noted that the economy has been hard hit by COVID-19, not only in the country and the region, but throughout the world.

For his part, Dr. Alejandro Delgado Castro, Dean of the Faculty of Tourism, congratulated the graduates -- among them two of the distance course -- for this happy ending of a memorable journey, and wished them success in their professional and personal lives.