UK and Argentina Agree to Identify Bodies from Malvinas War 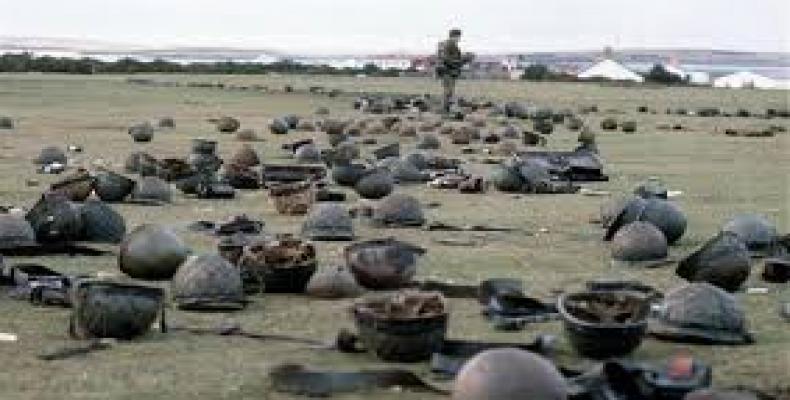 London, December 28 (RHC)-- Argentina and the UK have agreed to identify bodies buried on the Malvinas Islands, which both countries fought a war over in 1982.

In London, British Foreign Office Minister Alan Duncan and Argentinian Vice Foreign Minister Pedro Delgado signed the agreement that will allow forensic experts from the International Committee of the Red Cross to take DNA samples of unidentified Argentinean soldiers left on the islands which will then be compared to relatives to consent to testing.

There are thought to be 123 unknown soldiers buried on the Islands, killed in the 1982 war which in total claimed 600 Argentines and over 200 Britons. Not all families have given consent for testing.

The agreement comes amid a recent easing of relations between the two states since right-wing Argentinean President Mauricio Macri took power, making overtures to the British about relaxing Argentina's position over the islands.

Argentina has claimed sovereignty over the Malvinas Islands since 1833, when the U.K. occupied the territory.  In April 1982, a war broke out when Argentina’s military dictatorship tried to regain the territory, but were defeated with the British assuming control of the islands which it refers to as the Falklands Islands. States from the Union of South American Nations, UNASUR, has also backed Argentina’s sovereign claims.

Since the 74-day war ended, tensions over the islands have remained constant.  Argentina still maintains its sovereignty over the territory and a United Nations ruling earlier this year said that the islands were in Argentina's waters.

While the islands remain a focus point of Argentinean nationalism and pride, since taking the presidency a year ago, Macri has opened up relations on the issue more than any other leader to date, breaking decades of Buenos Aires emphasizing its sovereign claims.

Earlier on Tuesday, both nations agreed to renew civilian flights to the islands, lifting what former President Cristina Fernandez used as a strategy to increase Argentine control over the territory.

In September, both countries agreed to work toward lifting restrictions on resource extraction including gas, shipping and fishing industries for the islands and the U.K. said that thousands of landmines left over from the conflict will be removed.

While Macri maintains that the islands will always be part of Argentina, many say that his opening up strategy is moving too far away from sovereignty claim and gives too many concessions to London.

Macri was heavily criticized for his response to an announcement of British military exercises in the region in October.

In September, a group of Argentinean intellectuals and activists including Nobel Peace Prize winner Adolfo Perez Esquivel and former Ambassador to the U.K. Alicia Castro, said that the current administration is unraveling a number of import gains on the islands made under Fernandez and in particular Argentina’s protection of its natural resources.