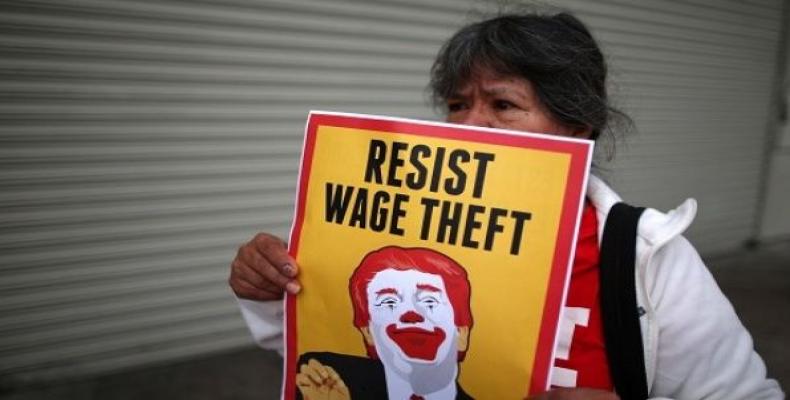 Chicago, May 26 (RHC)-- In the United States, thousands of protesters took to the streets of downtown Chicago demanding higher wages and union rights from McDonald’s, the U.S.' second-largest employer which marchers called "The Donald Trump of Corporations.”

The demonstration was organized by “Fight for $15,” a union-backed lobby group calling for an hourly minimum wage of $15 and workers’ union rights.   The “March on McDonald’s,” as it is being called, is backed by several Trump resistance movements, such as the Women’s March, MoveOn.org and the Black Lives Matter Movement.

"We need a McDonald’s that pays us a living wage," said Ashley Bruce, a “Fight for $15” leader and McDonald's worker for four years.  "We need $15 an hour to sustain our families. We can't keep trying to make ends meet like this.  This is not working for us.  We deserve to live.  We're barely making it on $10.50 an hour."

"Like Trump, McDonald's faces widespread charges of stealing from workers' paychecks, sexually harassing women, ripping off taxpayers, and firing people for speaking out," organizers said in a press statement.

This week, they continued, workers and leaders from across the progressive movement “will stress that resistance to Trump's agenda must include resistance to companies like McDonald's that are 'the Donald Trump of corporations.'"

They also held another protest outside the McDonald's shareholder meeting in Oak Brook, Illinois.  Hundreds of fast-food cooks and cashiers protested at McDonald’s stores throughout the United States.

“Labor rights are women’s rights,” Carmen Perez, co-chair of the Women’s March, said in an e-mail.  “The link between the gender justice and labor justice movements is strong — but often unacknowledged... These fights are our fights, and the only way we win is together.”

In 2015, McDonald’s announced that it will pay at least $1 per hour more than the local minimum wage at company-owned restaurants, bringing the average hourly rate for its U.S. employees to $9.90.

Since 2012, several states and major cities, including California, New York and Seattle, have passed measures requiring an hourly minimum wage of $15.  Companies like Facebook and Aetna also have announced plans to raise worker pay to at least $15 per hour.

"[A]s I march on McDonald’s, it won't just be for me.  It will be for all the Americans who dream of a world where everyone from CEOs to President Trump give workers a fair shot,” Kenya Banks, a McDonald’s cashier from Missouri, wrote at Civil Eats.