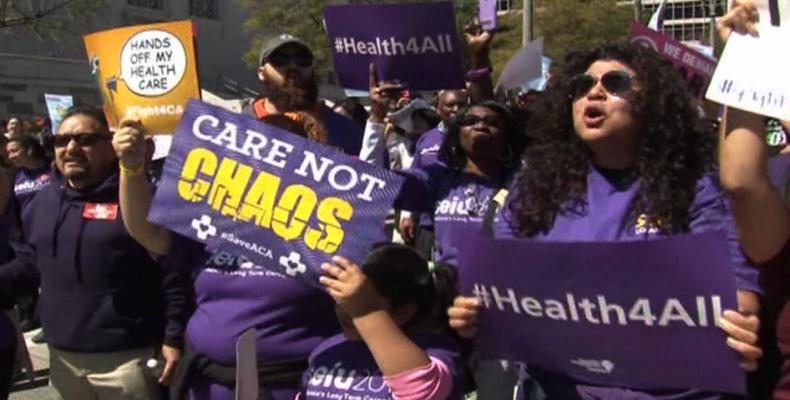 According Quinnipiac University poll released on Wednesday, 63 percent of people said they don't like the way Trump is attempting to reform the American healthcare system, while only 29 percent said they like his plan.

The poll found that 58 percent of respondents have disapproved of Republican efforts to repeal and replace the Affordable Care Act, or Obamacare, the signature health insurance achievement of former President Barack Obama, which covers some 20 million Americans.  Only 16 percent said they like the Republican work in this regard.

According to reports, Senate Republicans are struggling to gain support for their Obamacare repeal-and-replace bill following the release of a non-partisan study forecasting that the GOP plan would leave 22 million more Americans uninsured over 10 years.

The survey by the Congressional Budget Office (CBO), issued on Monday, has created more problems for the Republicans striving to pass their legislation.  But, Trump on Wednesday expressed confidence that Republicans in the Senate would ultimately prevail and pass the Obamacare repeal-and-replace legislation.  "It's very tough ... I think we're going to get it over the line," Trump said at the White House in Washington, DC, adding that healthcare was "probably the toughest subject" to get approved by Congress.

If approved, the Trump administration’s healthcare bill would repeal most of the taxes that paid for Obamacare.  The bill faces an uncertain passage in the Senate, where Republicans have a very narrow majority.

The bill introduced last week by Senate Majority Leader Mitch McConnell looks in jeopardy now, despite optimism expressed by Trump.  McConnell has said he wants a final vote on the bill on Friday.  But on Tuesday he said he will delay the vote on the legislation until after the July 4 recess, saying he wants to make changes to the bill.

In the most contentious congressional vote of Trump's presidency last month, lawmakers voted 217 to 213 to pass the Obamacare repeal-and-replace bill.

No Democrats backed President Trump’s American Health Care Act (AHCA), also known as Trumpcare, and some 20 Republicans voted in opposition.  Most of the Republican politicians have long vowed to repeal Obamacare.

Meanwhile, Senate Minority Leader Charles Schumer on Wednesday called on Trump to meet with Democrats to negotiate a deal on healthcare.  "President Trump, I challenge you to invite us, all 100 of us, Republican and Democrat, to Blair House to discuss a new bipartisan way forward on healthcare in front of all the American people," Schumer said, referring to the President's Guest House in Washington, D.C.

He added that both Republicans and Democrats should focus on reforming the healthcare system in the wake of the decision to delay the vote on the healthcare bill.  "I would make my friends on the Republican side and President Trump an offer: Let's turn over a new leaf.  Let's start over," Schumer said.

Healthcare experts from across the political spectrum have said that Trump’s healthcare bill is unworkable and suffers from fatal flaws and could lead to Americans dropping out of the healthcare market.

Experts agree that the bill fails to reach the objectives laid forth by Trump, which includes affordable coverage for everyone, lower deductibles and healthcare costs and better care.