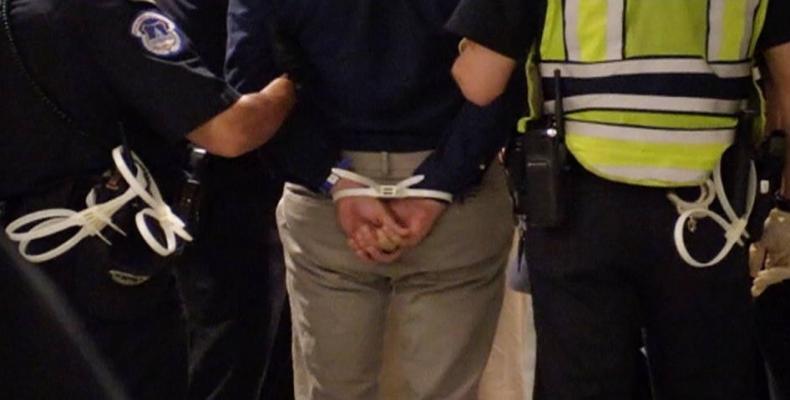 Washington, July 20 (RHC)-- Dozens of protesters have been arrested in the United States while holding a sit-in against President Donald Trump’s proposed healthcare bill.  Police in Washington, DC, said 155 demonstrators were detained inside three Senate office buildings on Wednesday.

The protests came hours before Vice President Mike Pence was due to tour Capitol Hill on Wednesday night to encourage Republican lawmakers to reach agreement on repealing or overhauling Obamacare.

Demonstrations against GOP efforts to overhaul healthcare plan have been commonplace in the US, since the election of President Trump.

On Monday, the US Republican Party called for the repealing of the American Care Act, after failing to gather adequate support for its replacement bill.

Senate Majority Leader Mitch McConnell said that his party had failed to unite behind the Better Care Reconciliation Act (BCRA) despite having a 52-48 majority over Democrats in the 100-member Senate.

The latest GOP attempt to repeal and replace Obamacare was fatally wounded in the Senate when two more Republican senators voiced their opposition to the legislation.

The announcements from Mike Lee of Utah and Jerry Moran of Kansas effectively stalled the bill in the upper chamber. Senators Susan Collins and Rand Paul had already opposed the bill, arguing that could slash funding for Medicaid, the health insurance program for the poor and the disabled.

This is yet another embarrassing failure for Republicans, who saw Trump’s election victory as an opportunity to deliver on their decade-long campaign promise to introduce a new healthcare system.

A new poll shows that a majority of Americans oppose the GOP legislation.