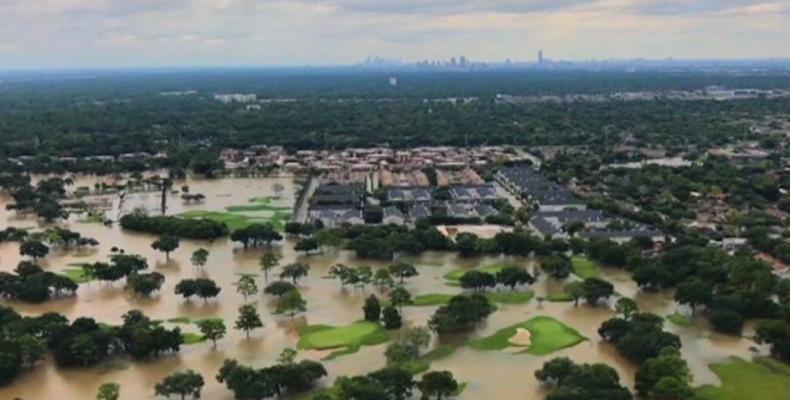 Houston, September 4 (RHC)-- In the U.S., Texas Governor Greg Abbott says up to $180 billion is needed for the relief efforts in the aftermath of Hurricane Harvey, which recently hit the United States' Gulf region.  In an interview with CNN, Greg Abbott said on Sunday that the nearly $8 billion requested by the White House to confront the impacts of the tropical storm was only a small down payment.

"That aid will not be [enough]," Abbott said.  "However, it is very clear, the president has made it clear, Congress is making it clear, this is just a down payment."

He further compared Harvey to Hurricane Katrina, one of the five deadliest hurricanes in the history of the United States.  "Let's not compare it to Sandy, let's compare it to Katrina," said the Republican governor.  "Listen, the population size and the geographic size is far larger than Katrina and, I think, Sandy combined.

Harvey came ashore last week as the most powerful hurricane to hit Texas in more than 50 years. The storm caused chest-deep flooding on some streets in Houston as rivers and channels overflowed their banks.

Abbott also elaborated on the extent of suffering, speculating that more than 5 million people have been affected.  "We have over 5 million people who were affected by this. It's not just the flooding in Houston, it's the hurricane swath all the way from Corpus Christi over to Beaumont," he said. "So, it's going to require even more than what was funded for Katrina, which was about $120 billion."

Recovery in the wake of Harvey is expected to last for years.  "When you look at the number of homes that have been mowed down and destroyed and damaged, this is going to be a huge catastrophe that people need to come to grips with," Abbott said.  "It's going to take years for us to be able to overcome this challenge."