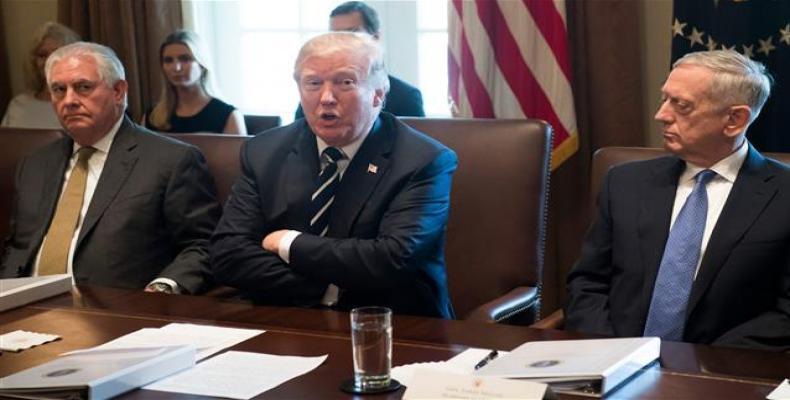 Washington, October 17 (RHC)-- U.S. President Donald Trump says the total termination of the 2015 nuclear agreement with Iran is “a very real possibility.”  Speaking to reporters ahead of meeting with his cabinet on Monday, Trump said: "I feel strongly about what I did.  I'm tired of being taken advantage of.”  And he added: "It might be total termination, that's a real possibility, some would say that's a greater possibility."

The comment came days after Trump announced he would not re-certify the international accord, officially known as the Joint Comprehensive Plan of Action.  Under U.S. law, the president is required to certify Iran’s compliance with the nuclear agreement every 90 days.  Trump has done so twice since taking office, albeit reluctantly.

In refusing to certify the accord for a third time, Trump has passed the buck to Congress to decide whether to restore sanctions on Iran, which were lifted in exchange for Iran agreeing to limit its nuclear program.  At his White House speech on Friday, Trump also threatened that he would terminate the JCPOA if Congress and American allies failed to change the deal in significant ways.

Trump’s new strategy has upset U.S. allies in Europe who have reiterated their firm commitment to the Iran deal.  EU ministers have warned that canceling the nuclear accord when Iran's commitment has repeatedly been certified would send a signal to North Korea that negotiating over its nuclear program is a waste of time.

Political analysts say that Donald Trump has been desperately trying to undo the agreement, which restricts his ability to pursue harsher policies against the Islamic Republic.