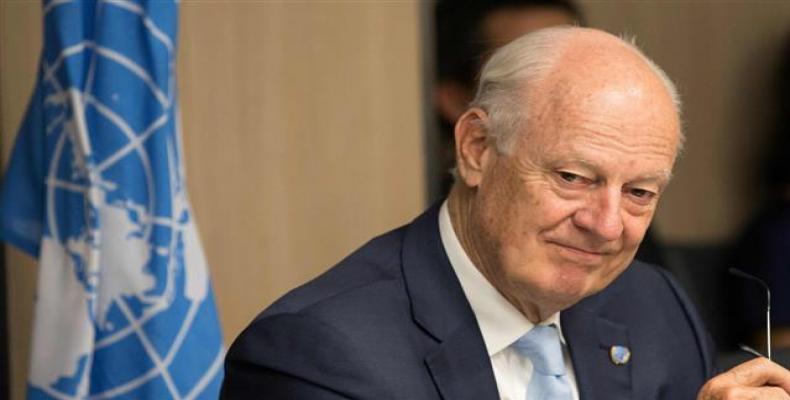 Geneva, October 27 (RHC)-- United Nations Special Envoy for Syria Staffan de Mistura has announced that a new round of talks aimed at ending the Syrian crisis will open next month.  De Mistura said that the talks, to be attended by representatives of the Syrian government and the opposition, would begin on November 28th in the Swiss city of Geneva.

“We need to get the parties into real negotiations,” said the diplomat during a UN Security Council meeting.  He added that the talks on Syria, seven rounds of which have been held since the start of the war in 2011, had now reached a "moment of truth” as Daesh, the main terrorist group fighting the Syrian government, was technically purged from its strongholds of Raqqah and Dayr al-Zawr in the east of the country.

The UN-mediated talks will follow another round of meeting between Iran, Turkey and Russia, which together act as guarantor states in peace talks for Syria, in the Kazakh capital of Astana next week.  The three have helped set up de-escalation zones across Syria to reduce fighting on the ground.

De Mistura said the focus in the upcoming UN talks would be on steps toward drafting a new constitution and how elections could be held in Syria under UN supervision.  He did not mention anything about opposition demands for a transition of power.  Previous rounds of talks mainly failed due to the opposition’s insistence for the departure of Syrian President Bashar al-Assad from power.  But, the demand seems to be no bargaining chip in talks any more due to Syria’s continued victories against terrorists.  Syrian government forces, backed by allied fighters and Russian air coverage, have managed to retake major territories that used to be controlled by terrorists.