Demonstrations across Brazil to protest murder of Rio councilwoman 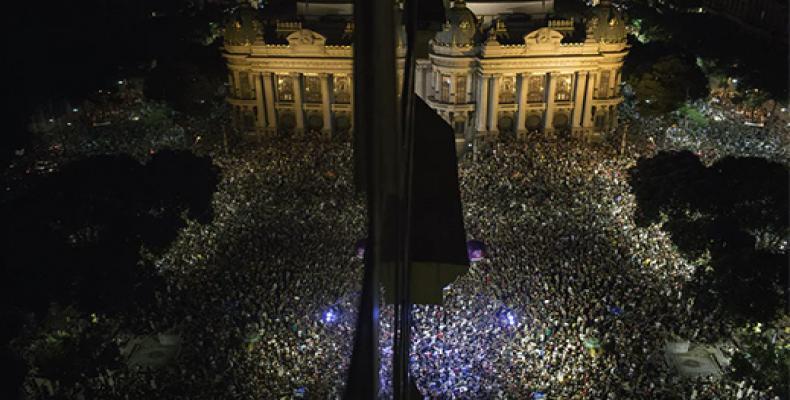 Rio de Janeiro (RHC-Agencies) --Tens of thousands of people in Rio de Janeiro and other cities across Brazil took to the streets to condemn the murder of politician Marielle Franco.

Franco, 38, and her driver, Anderson Pedro Gomes, were killed Wednesday night in Rio when two men in a car fired nine shots into her vehicle.

“The death of Marielle, a combative councilwoman and activist for human rights and social equality, leaves us precariously" the party said in a statement.

She was the only black female representative and one of seven women on the 51-seat city council.

Franco’s death came weeks after Brazil’s president Michel Temer gave the military sweeping security powers in Rio’s sprawling favela, where gang violence is rife. At least 13 political candidates were slain in the lead-up to 2016’s city council polls when Franco was elected, according to Reuters.

Meanwhile, the United Nations is calling for a transparent, independent investigation into Franco´s assassination.

The Office of the High Commissioner for Human Rights (OHCHR) urged authorities to carry out the investigation independently so that it can be considered credible, and to identify those responsible and bring them to justice.

Franco's assassination comes two weeks after she was named a rapporteur in the special commission established by the city council to monitor military intervention in Rio de Janeiro. Earlier this week she denounced the deaths of two youths during a military police operation in Acari community.