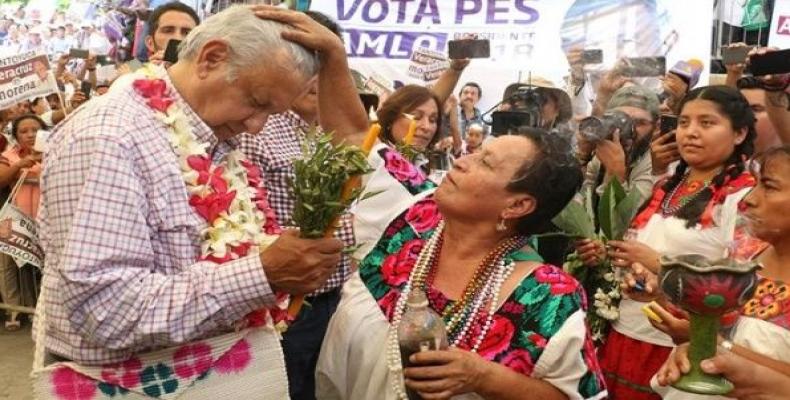 Mexico City, May 15 (RHC)-- The Mexican center-left presidential candidate Andres Manuel Lopez Obrador, or AMLO, said the current government spent hundreds of millions of dollars in a smear campaign against teachers who opposed the controversial education reform, which he has promised to cancel if he is elected.  “They tricked people by using Hitler's technique: that a lie told many times can become a truth... I estimate that more than 8 billion pesos [about $411 million] were spent in discrediting teachers and that must be known,” said Lopez Obrador during a campaign event in San Andres Tuxtla, in the gulf state of Veracruz.

Lopez Obrador has promised to revise the reform, approved by the ruling Institutional Revolutionary Party (PRI) and its offshoot the Mexican Ecologist Green Party (PVEM), which has been fiercely opposed by teachers' unions and organizations across the country.  Critics of the reform argue it has nothing to do with reforming the education system, but rather modifies labor contracts for education professionals, paving the way for liberalization of the system.

During the event, Lopez Obrador said he read in a newspaper that the education minister spent two billion pesos (about $103.5 million) on media contracts just in one year, and asked reporters to research the money spent on the smear campaign against the teachers in order to redeem themselves, adding that since then media outlets have had a different, more critical attitude towards the reform.  He also pledged to backtrack on any law that affected the dignity of the teachers in the country.

When asked about the continuous evaluation tests imposed by the reform on the teachers, Lopez Obrador said the teachers didn't oppose the evaluations as such, but that the government was using them to “try and fire them, and that's anti-pedagogical and anti-labor under any circumstance.”

To clarify his remarks, Lopez Obrador said that “inmates have the right for rehabilitation, to be reintegrated into society, so if a teacher is falling behind, he must be given the opportunity to keep up to date and improve, and not tell him 'you're out' after the first exam, that's a reactionary attitude; not even businesspeople do that with their employees.”  He also said teachers in the country agree with him and that there was no need to sign anything, because they trust him and know he keeps his word.

Speaking about all the money the government spends on media and communication, the candidate said his administration would reduce such investment, trying not to harm those outlets because “the government needs to inform and they need the money to survive.”  The candidate said: "But won't have it in such excessive quantities, I told this to the radio and TV; I told them: 'just a little, because it's holy'."

During another campaign event in San Pablo Guelatao, in the southern state of Oaxaca Sunday, Lopez Obrador promised the crowd of about 4,500 teachers from different states and political organizations to backtrack on the reform, whose only objective was “to revile and humiliate the teachers” and create a new one that takes into account teachers from all across the country and its proposals.

The front-runner candidate also explained the main points of his education program, understanding it as a right for everyone and not a privilege. Among the proposals is having a basic nutrition program for schools in marginalized zones of the country and a 2,400 pesos (about $130) scholarship so students from lower classes of society don't have to abandon their studies for work to support their families.

The left-leaning candidate continues to lead in most national polls. In a survey published by the daily El Financiero Monday, Lopez Obrador got 46 percent of the vote intention, 20 points ahead of right-wing Ricardo Anaya, the second place in the polls.

The candidate of the ruling party Jose Antonio Meade keeps going down in the polls and got 20 percent of the voting intention.  Meanwhile, independent candidates Margarita Zavala and Jaime Rodriguez “El Bronco” are farther behind.