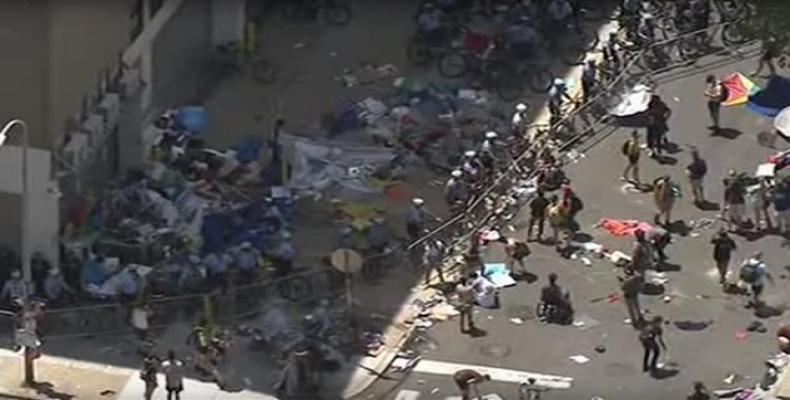 Philadelphia, July 6 (RHC)-- U.S. police have attacked demonstrators in the states of New Mexico and Philadelphia protesting against President Donald Trump's "zero tolerance" policy on immigration that separated children from migrant parents on the U.S.-Mexico border.

On Thursday night, police used force against the protesters, arrested a dozen of them and ushered them out of the New Mexico Statehouse.  Miles Conway, a union official who helped organize the demonstrations, said that protesters who refused to leave the Capitol were led from the building and released with citations for trespassing.

Police also arrested three protesters who refused to leave the governor's offices and were charged with resisting arrest.  Eleanor Chavez, Marlene Perrotte and Susan Schuurman were driven away in a police patrol car.

Hundreds of protesters arrived at the New Mexico state Capitol in the afternoon in coordination with demonstrations in Washington, DC, where police arrested hundreds of people.

The protesters called on Republican Governor Susana Martinez to end the deployment of the New Mexico National Guard at the border with Mexico and demand that Trump show respect for the rights of asylum seekers and immigrant families.

Police also broke up an encampment outside an Immigration and Customs Enforcement office in Philadelphia, where dozens of protesters took over sidewalks to protest against the separation of immigrant children from parents on Thursday.

The Trump administration's "zero tolerance" policy towards illegal immigration has led to family separations at the U.S. border with Mexico.  Facing overwhelming bipartisan backlash, the US president signed an executive order last week to halt the separations.

More than 2,000 separated children are currently in the U.S. government's custody, according to the Department of Homeland Security, which claims that it is aware of their locations and is making an effort to reunite them with their families.