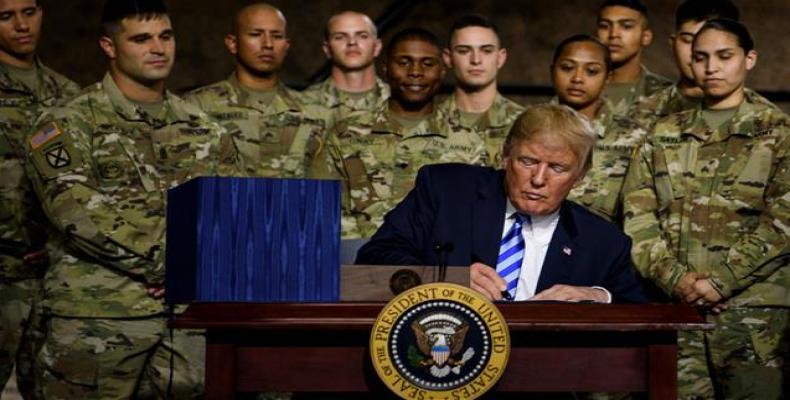 Washington, August 15 (RHC)-- U.S. President Donald Trump has signed the 2019 defense spending authorization bill, increasing domestic spending on what is already the world’s largest military.  This comes as global military spending reaches the highest level since the end of the Cold War.

With the president’s signature, the legislation approves a record-setting $717 billion in spending on the U.S. military and related industries, a $17 billion increase from 2018.

Discretionary spending will increase by about $100 billion from 2017 levels, according to the Congressional Research Service.  The bill also allocates millions of dollars for Trump's proposed military parade.

Spending on overseas conflicts such as the 17-year-old war in Afghanistan will increase by more than $2 billion to $69 billion, the highest price tag since 2014.  Taxpayers in the United States have spent about $5.6 trillion on the “war on terror” since 2001, and the nation continues to spend billions every year supporting operations in countries such as Iraq, Syria and Afghanistan.

According to the latest data from the Stockholm International Peace Research Institute, the huge U.S. military alone accounts for about 40 percent of global military spending, which is growing once again under the Trump administration after gradually shrinking during the later years of the Obama administration.  Trump has repeatedly claimed that he is delivering military funding at “historic” levels, but defense spending actually peaked during the height of the Iraq War in 2010.

Speaking before military service members at Fort Drum in New York during the signing ceremony, Trump focused on his promise to “rebuild” the military “after years of devastating cuts,” touting funding for new combat vehicles, updated missile systems and a pay increase for troops.

“The tragedy is that the Pentagon wastes many billions of dollars every year on unneeded or fatally flawed weapons systems, hand-outs to corporate contractors and a bureaucracy that’s as big as our active-duty armed forces,” said Lindsay Koshgarian, program director of the National Priorities Project, a group that tracks defense spending. “Until Congress decides to hold the Pentagon accountable, the waste will continue.”

“While other programs have to justify their very existence, the Pentagon gets unquestioning and unearned support from majorities in both parties.”

As the U.S. military expanded its global reach during the “war on terror,” the day-to-day costs of maintaining the military and compensating personnel has ballooned.  Since 2000, the portion of the defense budget allocated to “operation and maintenance” has grown by 50 percent, even as the number of active-duty personnel has declined, according to a 2017 report by the Congressional Budget Office (CBO). These costs include everything from jet fuel to paper clips, and the CBO notes that they are difficult to track.

The passage of the annual defense package is typically heralded as a rare example of bipartisanship in Congress, but now that Republicans have passed tax cuts for the rich while seeking massive cuts to health care, education and social services, some progressives in Congress have been speaking out against increases in defense spending.

The ten Senate votes against this year’s defense authorization bill include Senators Bernie Sanders, Kamala Harris, Kirsten Gillibrand and Elizabeth Warren. All four lawmakers are thought to be considering a presidential run in 2020.  Still, a majority of Senate Democrats voted to send the legislation to Trump’s desk, and nearly every Republican did as well.

“The approval process for a $717 billion Pentagon budget underscores the lack of any meaningful opposition or questioning of Pentagon wishes,” Koshgarian said. “While other programs have to justify their very existence, the Pentagon gets unquestioning and unearned support from majorities in both parties.”

The U.S. military soaks up more than half of the nation’s discretionary budget, and the US government spends significantly less money on public health, the environment and education. For example, had discretionary military spending stayed stable since 2017, the U.S. would have saved enough money to fund Bernie Sanders’s proposal to make college tuition free for every American.