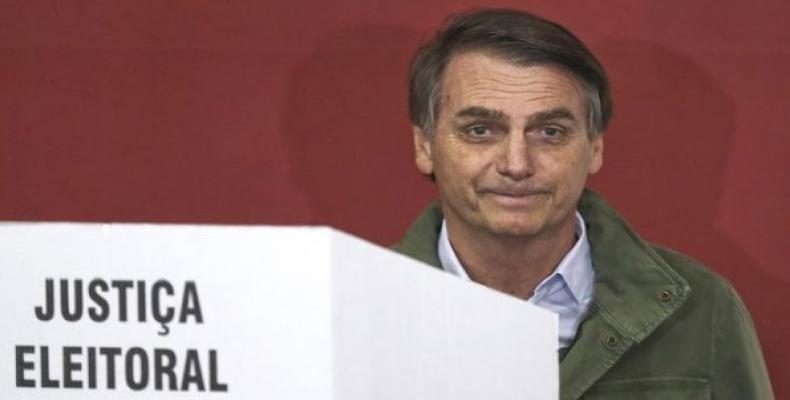 Brasilia, November 14 (RHC)-- Brazil's Supreme Electoral Tribunal (TSE) has announced that it found 17 irregularities in the campaign accounts of president-elect Jair Bolsonaro and gave him three days to prove there are no irregularities.

“Upon carrying out an examination of the statements and documentation provided by the candidate in accordance with electoral law, some inconsistencies were observed,” wrote a TSE analyst.   The electoral court described possible campaign donations from illegal sources, donations from unidentified donors and lack of information on how campaign funds were spent, among other issues.  It also said that the candidate failed to comply with deadlines on reporting income and expenses to the electoral justice system.

Local news outlet Brasil 247 reported that AM4, Bolsonaro’s largest donor during the electoral campaign, did not have the authorization to collect donations on the internet. AM4 was also said to be responsible for circulating fake news on Whatsapp against the left-wing candidate Fernando Haddad of the Workers’ Party (PT).

In October, the PT candidate filed a complaint with electoral courts asking them to investigate allegations of illicit financing of misleading propaganda by the far-right Bolsonaro.

Bolsonaro’s defense team said that the TSE allegations were not worrisome for his team.  “There’s nothing that worries us because the replies... will demonstrate that (none of the allegations) are grave enough for the campaign’s filings to be rejected,” said Karina Kufa, member of Bolsonaro's legal team.

Jair Bolsonaro won the presidential elections on October 28 with 55 percent of the vote.  According to Bolsonaro's inner circle, the president-elect’s team raised around $1 million during the campaigns but spent around $500,000.

If the electoral court proves the president-elect received illicit funding and is responsible for other violations regarding electoral funding, his presidential victory could be annulled.