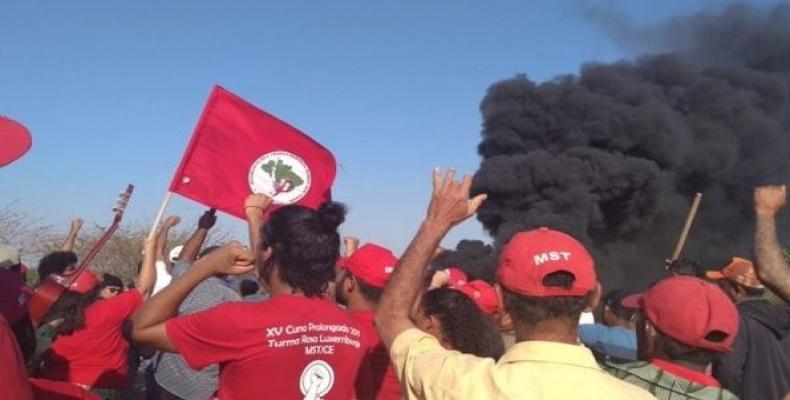 Brasilia, November 22 (RHC)-- Brazil's military police violently entered a camp managed by the campesino Landless Workers' Movement (MST) on Wednesday to expel 150 families that have lived in the territory Ze Maria do Tome, in the municipality of Limoeiro, state of Ceara, for four years.

According to reports, this is the fourth attempt in 10 days to expel them.  The campesino families created a barricade and vowed to resist the forcible eviction.

Campesinos in Brazil, one of the most unequal countries in terms of land distribution where one percent of farms cover 45 percent of the total arable land in Brazil, have long demanded a land reform.

In April 2016, A Brazilian court ordered the government of Dilma Rousseff (Workers' Party) to suspend its agrarian reform program, which according to the MST is needed to address the 4.6 million landless families living in conditions of extreme poverty and distress.

Attacks on the MST have been increasingly registered.  One violent incident was reported on the eve of Brazil’s presidential elections, which far-right Jair Bolsonaro of the Social Liberal Party won.

According to the MST, a camp in the state of Mato Grosso do Sul (southern Brazil) was burned down by a group of Bolsonaro supporters.

President-elect Bolsonaro is an open supporter of Brazil’s former military dictatorship, lasting from 1964 to 1985, which persecuted and tortured dissenters.  He has also endorsed torture, promised to further militarize Brazil’s impoverished favelas, and referred to the MST as a terrorist group vowing to defend private property.

Bolsonaro's son, Eduardo, recently said in an interview: “What’s going on now is that groups such as the Landless Workers' Movement sometimes use their criminal power in order to invade lands, set tractors on fire in order to force the ranchers to sell their lands below market price... They impose terror in order to obtain benefits."