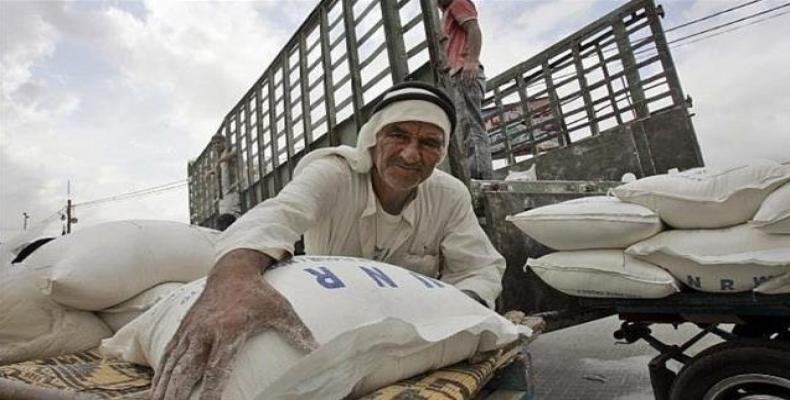 United Nations, December 20 (RHC)-- The United Nations' World Food Program (WFP) says it would cut food aid to around 190,000 impoverished Palestinians in the besieged Gaza Strip and the occupied West Bank -- half of all its recipients there -- due to funding shortages.

The UN food agency blamed the funding shortages on cuts by the United States, the agency's biggest contributor, and other nations in aid to Palestinians.

"WFP has been forced, unfortunately, to make drastic cuts to the number of people that we support across Palestine, both in Gaza and the West Bank," Stephen Kearney, WFP country director in the Palestinian Territories, told Reuters.  He said taht the cuts in food assistance will take place starting January 1st.

Kearney said the agency was making the cutbacks "mainly because the amount of funding that we are receiving is dropping drastically.”  He added: “It's not just WFP, it's across the whole humanitarian community as donor contributions significantly fall."

The United Nations and the Palestinian Authority appealed for $350 million in humanitarian relief for Palestinians next year, noting that much more was needed but they had to be realistic after a year of funding cuts, especially by the Trump administration, which has taken an increasingly hard-line stance toward Palestine.

The U.S.-Palestine ties deteriorated last December, when Donald Trump declared Jerusalem as the capital of Israel and announced plans to transfer the embassy from Tel Aviv to the occupied city.

The contentious move led Palestinian President Mahmoud Abbas to formally declare that the Palestinians would no longer accept the U.S. as a mediator to resolve the conflict because Washington was “completely biased” towards Tel Aviv.

Kearney said the UN agency needs $57 million to continue providing the current level of food assistance to 360,000 people in 2019.  "The people that we do reach are the most vulnerable across Palestine, and we appreciate that we are going to put further anxiety on these families," he said.

Fawzi Barhoum, spokesman for the Palestinian resistance movement Hamas, that runs Gaza, called on the United Nations to "continue to provide the needs of the Palestinian people until they regain their freedom and not take decisions that worsen their suffering."

The Gaza Strip has been under an Israeli blockade since June 2007.  The blockade has caused a decline in the standard of living as well as unprecedented levels of unemployment and unrelenting poverty.

Maher al-Tabbaa, a Gaza-based economist, said the enclave's poor would be particularly badly affected, saying: "The poverty rate in Gaza is over 53 percent and the WFP decision will get that higher, it will also affect the number of people suffering from food insecurity, whose percentage stands today at 70 percent."