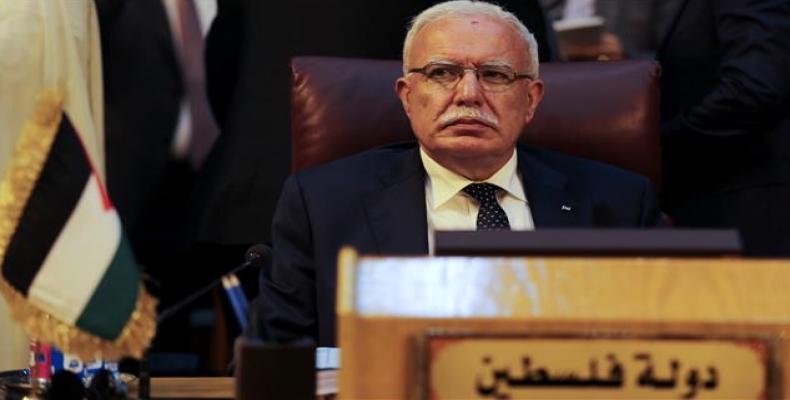 Ramallah, May 11 (RHC)-- Foreign Minister Riyad al-Maliki said the Palestinians will not accept Washington's offer no matter how much money is attached to it, expressing the Palestinian stance on the proposed plan by the Trump administration as a solution to cease the Israeli-Palestinian conflict.

"This is not a peace plan but rather conditions for surrender, and there is no amount of money that can make it acceptable," al-Maliki told the United State's Middle East peace negotiator, Jason Greenblatt.

"Some ask us: 'What if they surprise you?'  We tell them we would have been more hopeful had they not been deaf to our appeals, blind to Israeli violations and mute, at best, on the fundamentals of peace, when not actively undermining them," added the foreign minister.

Palestinian officials currently rule out the U.S.'s role in peace talks after the Donald Trump administration unilaterally recognized Jerusalem as Israel's capital, upending long-established understandings that undermine negotiations to end decades of Irsraeli occuption of Palestine and provide for a two-state solution.

"When the U.S., prior to announcing its plan, recognizes Jerusalem as the so-called 'capital of Israel' and claims they are entitled to take such a sovereign decision that is in blatant violation of international law and UN Security Council resolutions and pretend it has no implications on peace, it is not possible to have faith in such efforts," Maliki said.