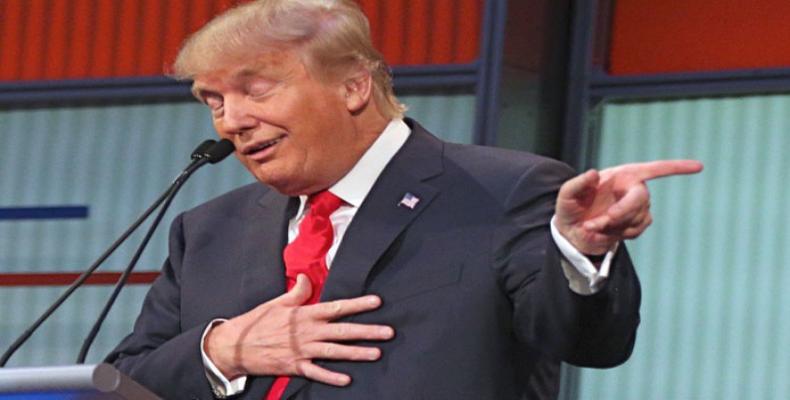 Washington, August 25 (RHC)-- U.S. President Donald Trump has reportedly suggested using nuclear weapons against hurricanes to prevent them from hitting the United States.  "I got it.  I got it. Why don't we nuke them?" Trump said a White House briefing with Homeland Security and national security officials.

According to a report on Sunday by Axios, citing an anonymous source, Trump said: "They start forming off the coast of Africa, as they're moving across the Atlantic, we drop a bomb inside the eye of the hurricane and it disrupts it.  Why can't we do that?"

The briefer reportedly reacted by saying, "Sir, we'll look into that."   The briefer "was knocked back on his heels," the source in the room added.  "You could hear a gnat fart in that meeting. People were astonished.  After the meeting ended, we thought: 'What the f---?  What do we do with this?'"

Needless to say, scientists and the National Oceanic and Atmospheric Administration have asserted that idea would not work.  "Apart from the fact that this might not even alter the storm, this approach neglects the problem that the released radioactive fallout would fairly quickly move with the tradewinds to affect land areas and cause devastating environmental problems.  This is not a good idea," according to Tropical Cyclone Myths Page an online fact sheet by the National Oceanic and Atmospheric Administration.

The U.S. president brought up the issue a second time with a senior administration official.  Their conversation is described in a 2017 National Security Council memo.  The source added that this NSC memo captured "multiple topics, not just hurricanes. … It wasn't that somebody was so terrified of the bombing idea that they wrote it down.  They just captured the president’s comments."