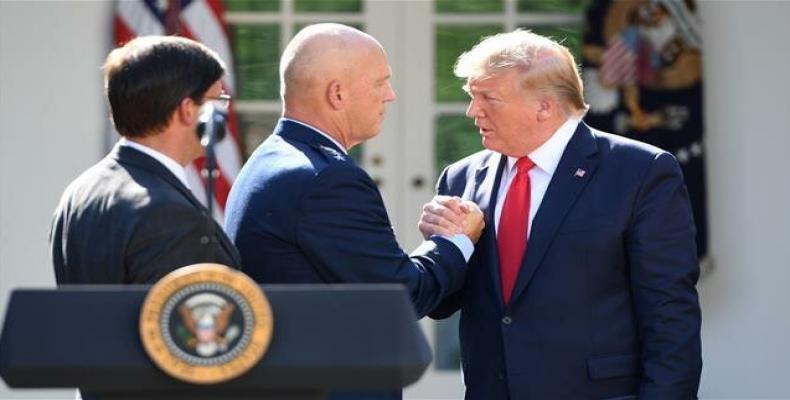 Washington, August 30 (RHC)-- U.S. President Donald Trump has established a new Pentagon agency, under the command of US Air Force General John Raymond, dedicated to warfare in space as Washington considers China and Russia its rivals in the new military frontier.

"This is a landmark day, one that recognizes the centrality of space to America's security and defense," Trump said in a White House ceremony on Thursday.  "SpaceCom will ensure that America's dominance in space is never threatened,” he said.

Trump has long expressed concerns about the growing military capabilities of Russia and China beyond Earth.  He has insisted such a move is necessary to tackle vulnerabilities in space and assert U.S. dominance in orbit.  "The dangers to our country constantly evolve and so must we," said Trump.

"Our adversaries are weaponizing earth's orbits with new technology targeting American satellites that are critical to both battlefield operations and our way of life at home,” he said.  "Our freedom to operate in space is also essential to detecting and destroying any missile launched against the United States," he added.

US Air Force General John Raymond will lead the new command.  Earlier, General John Raymond, who was confirmed as the commander of Space Command by the Senate in June, said that US rivals China and Russia are already investing huge resources into space operations.

"We are at a strategic inflection point where there is nothing that we do as a joint coalition force that isn't enabled by space," Raymond told reporters at the Pentagon.

"I'm convinced that space is a war-fighting domain. I'm convinced that our way of life and our way of war depend on space capabilities," he said.  The Space Command is the Pentagon's 11th full command and second launched in two years.  SpaceCom, as it will inevitably come to be known, is viewed as a step toward the Space Force military branch, which would need congressional approval.

The creation of "Space Command" would also start out a turf war within the Pentagon, mainly with the Air Force, which currently is responsible for most space operations.