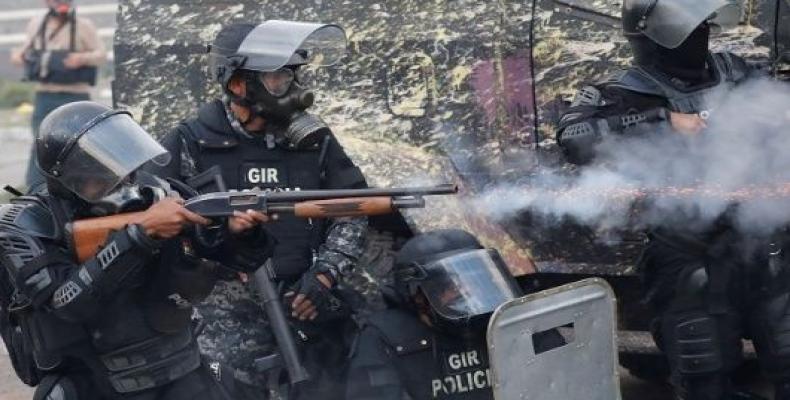 Quito, October 12 (RHC)-- Ecuadorean riot police have fired live ammunition at protesters, as demonstrations against President Lenin Moreno continue.  Just hours after Moreno invited Indigenous groups and other civil society organizations to “dialogue” for the first time since massive protests began ten days ago in the Andean country, the National Police bombarded these peaceful protesters with live ammunition and tear gas as they gathered in front of the National Assembly in Quito.

Videos from Friday afternoon show tear gas bombs being shot from the armored cars and live ammunition sounding off, sending masses of demonstrators running toward the historic center to protect themselves.

Ecuadorean social scientist, Aquiles Hervas, said over social media from the scene: “We have just witnessed a vile betrayal. [Authorities] accepted the crowd’s arrival outside the assembly in order to talk shortly after the president’s announcement.  Once they had approached [the building], the police fired at close range while people were eating soup.  Several children were trampled by the terrified crowd.  It is a war scene with unarmed people, several were injured.”

Videos capturing the attacks show hundreds of people running eastward from the assembly, trying to escape the tear gas grenades and armored vehicles.

For the first time since nationwide protests began last Thursday, President Lenin Moreno, on Friday, called on Indigenous movements to "dialogue" the controversial decree 883 that ended fuel subsidies and reduced workers' rights as of October 3rd, unleashing massive protests against the measures by the unpopular government that has a 17 percent approval rating.

The austerity measures are being implemented at the behest of the International Monetary Fund (IMF) in exchange for a $4.2 billion loan negotiated by the Moreno administration last March.   "Let's sit down to talk, let's sit down and talk about Decree 883, let's talk about where your resources should go, and make sure they go to those who need it most," Moreno said in a 20 second message to the nation at 3:00 p.m. local time.  The violent incident outside the National Assembly occurred at around 4:30 p.m.​​​​​​​

Just after the unexpected attacks, the Ecuadorean Confederation of Indigenous Nationalities (Conaie), which has spearheaded the protests, released a statement calling this one of the “worst massacres in Ecuadorean history” and dismissed Moreno’s recent invitation to dialogue, saying the group has been “trying to dialogue with the government for two and a half years” when the Moreno administration entered office, “but with no specific results.”

Conaie President Jaime Vargas who is on the frontlines of the marches, told teleSUR Friday afternoon from the scene that the government is using “live ammunition” against the people.    “These aren’t rubber bullets,” Vargas said, showing the camera gun casing left behind by National Police forces that have been filmed over the past week using excessive force on protesters in several cities throughout Ecuador.   “These have a range of 30-60 meters. They are murdering us,” Vargas said.  The Conaie reiterated in its Friday afternoon statement that it will not end protests, which have culminated in Quito, until the decree is revoked. ​​​​​​​