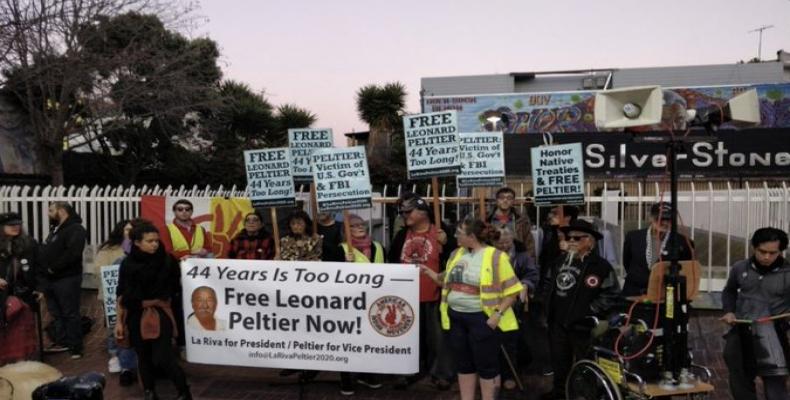 San Francisco, February 10 (RHC)-- Activists and allies with the Indigenous liberation movement have rallied to mark the International Day of Solidarity with Leonard Peltier, a Native American activist and political prisoner.  He is also a 2020 vice-presidential candidate, running with Gloria La Riva of the Party for Socialism and Liberation.

In San Francisco, California, organizers from the American Indian Movement West and the La Riva/Peltier presidential campaign erected the flag of AIM and a banner stating: “44 Years Is Too Long!  Free Leonard Peltier Now!”

Dr José Cuéllar, a professor of Chicano Studies at San Francisco State university and activist with AIM-West, lit a bundle of white sage to bless the space while Tony Gonzales of AIM-West and Gloria La Riva addressed the growing crowd of people gathering around the demonstration.  Organizers distributed leaflets throughout the crowd with information on Leonard Peltier’s case, the La Riva/Peltier 2020 presidential campaign and upcoming movement events.

Tony Gonzales told the story of Geronimo, another heroic fighter for indigenous liberation, who was held as a prisoner of war by the U.S. military for 25 years until his death.  Tony spoke about how the U.S. government imprisoned Geronimo in an attempt to prevent him from further organizing, and that they continue to imprison Leonard Peltier to this day for the same reason, explaining that “the U.S. government knows he wasn’t the shooter.”  He emphasized that this makes Leonard Peltier and Geronimo political prisoners.

Several people also spoke to the history of U.S. repression of Indigenous and African American peoples.  Jael Castro, a member of the Party for Socialism and Liberation, connected Leonard Peltier’s persecution with the assassination of Martin Luther King Jr, and asked the crowd: “Leonard Peltier’s crime is looking out for his people, looking out for indigenous rights — how is that justice?”

Gloria La Riva said that “despite his imprisonment, he never stopped fighting for his people and for all of us.”  She had just returned from visiting Leonard last week and spoke of how he is highly respected by his fellow prisoners for standing up for all of them, and connected this to another story of one of his earliest acts of resistance.

He had told her about the bitter racism and prejudice he and his community faced when he was a child, and how a settlement near where he lived was a “sundown town” where Indigenous, Black, and Latino people were banned after dark.  One day after work, Leonard and some companions walked through the town at night to get home where they were accosted by business owners and the police, and forced to defend themselves.  When they got back to their community, they knew there would be a showdown with the police but they stood up and forced the police to back down.  Concluding the anecdote, Gloria La Riva emphasized “that’s what Leonard’s really about.”

To conclude the speaker’s program, organizer Rosa Pergams with the Party for Socialism and Liberation read an excerpt from Leonard’s book “Prison Writings: My Life Is My Sun Dance”:

“Over the centuries our sacred lands have been repeatedly and routinely stolen from us by the governments and peoples of the United States and Canada.  They callously pushed us on to remote reservations on what they thought was worthless wasteland, trying to sweep us under the rug of history.  But today, that so-called wasteland has surprisingly become enormously valuable as the relentless technology of white society continues its determined assault on Mother Earth.  White society would now like to terminate us as peoples and push us off our reservations so they can steal our remaining mineral and oil resources.  It’s nothing new for them to steal from nonwhite peoples. When the oppressors succeed with their illegal thefts and depredations, it’s called colonialism.  When their efforts to colonize indigenous peoples are met with resistance or anything but abject surrender, it’s called war.  When the colonized peoples attempt to resist their oppression and defend themselves, we’re called criminals.”