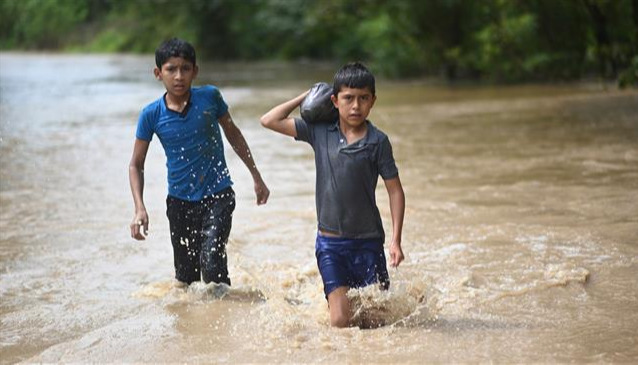 Children wading through the water in a flooded area in Panzos, Alta Verapaz, north of Guatemala City.  (Photo: AFP)

United Nations, November 13 (RHC)-- Tropical Storm Eta, which left more than 200 dead and missing in Central America, has "devastated the lives" of more than 1.2 million children in the region, according to UNICEF.

The number of children and adolescents affected by the storm "is expected to increase as relief teams gain access to the worst-affected areas," the United Nations Children's Fund said in a statement.  Eta caused severe damage throughout Central America, destroying road infrastructure, hospitals, schools, and water and sanitation systems.

More than 110,000 people, including some 44,000 children, were evacuated to temporary shelters in the seven countries of the region, according to UNICEF.  "Access to quality water and sanitation has become seriously problematic in the areas most affected by Eta," said Bernt Aasen, UNICEF’s regional director.  "Now the risk of waterborne diseases is increasing as is the risk of COVID-19 spreading in shelters."

Meanwhile, the International Organization for Migration (IOM) said 2.5 million people had been affected by Eta, which first made landfall in Nicaragua as a Category-4 Hurricane.  IOM personnel in Honduras, Guatemala, El Salvador, and Belize have distributed thousands of emergency kits, including kitchen sets, mattresses, sheets, and hygiene products, the organization said.

In Honduras alone, 1.8 million people had been impacted by Eta, the IOM said.  "The damage there can worsen the conditions of economic instability and food insecurity that have forced thousands of Central Americans to migrate in search of better living conditions," said the organization's regional director Michele Klein-Solomon.  The hurricane had "left behind the seed of future migration crises that we must try to prevent," she said.

The U.S. National Hurricane Center has warned that another tropical storm is forming in the Caribbean, with an 80 percent chance of becoming another major storm, possibly impacting the same areas as Eta.