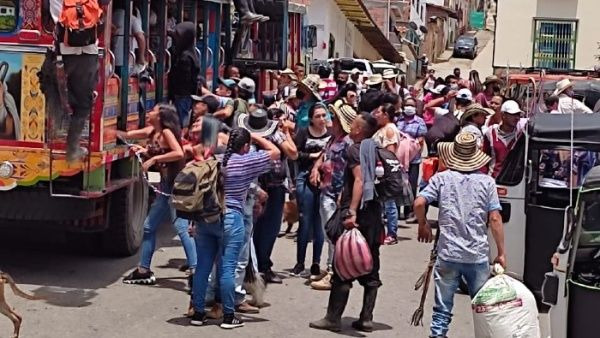 In recent days, more than 100 peasants have been displaced from their rural settlements and have occupied the center of urban centers such as Ituango. | Photo: Twitter: @AscaNat

Bogota, July 24 (RHC)-- The spiral of violence in which Colombia is immersed, even after the signing five years ago of the Peace Accord between the State and the rebel guerrilla fighters of the Revolutionary Armed Forces of Colombia (FARC-EP), has caused an increase in the number of forced displacements in rural areas of the country, according to a complaint made public this week by the Rios Vivos Movement.

Isabel Zuleta, a spokeswoman for the Movement, said that due to death threats by irregular paramilitary groups, around 100 peasants have been displaced from their villages to the urban center of the municipality of Ituango, in the north of Antioquia.

Zuleta also said that several leaders and shopkeepers received threatening letters, which provoked the displacement that began on Wednesday and has been increasing with the arrival of more families.

The peasants settled in the Juan XXIII school, located in the El Carmelo neighborhood of that municipality, which has a high presence of dissident ex-guerrillas and paramilitaries, explained the Ríos Vivos spokeswoman.

In detailing the situation, Zulueta explained that "the families are very saddened by this situation (...). Every year, every six months, they have been losing many things and we only see that the Mayor's Office has been hiding the situation and not really facing what is happening".

For Zuleta, the solution to this situation in Ituango is not only humanitarian assistance, but that the Colombian State, in accordance with the commitments assumed from the Peace Agreement, assumes its responsibility and responds for the losses that the peasants have in their productive projects every time they are displaced due to threats.