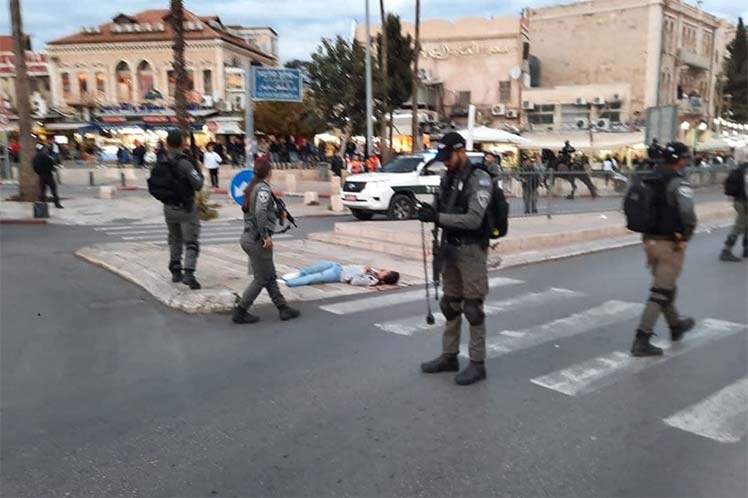 Ramallah, December 5 (RHC)-- The UN Human Rights Office in Palestine described as extrajudicial execution the killing of a young man in the city of Jerusalem by Israeli policemen, who were congratulated by Prime Minister Naftali Bennett.

A video that went viral on social media showed two Israeli uniformed officers firing at point-blank range last night at Mohammad Shawkat Salima, who was lying wounded on the ground.   Other footage shows police officers preventing medics from reaching the scene of the incident to provide first aid.

"Extrajudicial killings such as this are the consequence of the regular use of lethal force by well-armed and well-protected Israeli security personnel against Palestinians, and the near total lack of accountability for the killing and injury of Palestinians by Israeli forces," the agency said in a statement.

For its part, the office of the president of the Palestinian National Authority condemned the incident and called on the international community to act to stop the Israeli attacks.  This crime is part of Tel Aviv's escalation against our people, he said.

According to authorities in the neighboring country, Salima stabbed a Jew near Damascus Gate in the Old City before being shot by uniformed officers.Despite the video, Israeli border police commander Amir Cohen gave his full support to the officers, noting that they "acted resolutely."

Both Bennett and opposition leader Benjamin Netanyahu congratulated the guards.   This case must be investigated, said Regional Cooperation Minister Esawi Frej.   You should only shoot the attackers to save human lives, not kill them when they no longer pose a danger, he said.

MPs Aida Touma-Sliman and Ofer Cassif sharply criticized the officers, calling the Palestinian's death an execution and a horrible crime.