Vice-president-elect of Colombia arrives in Bolivia 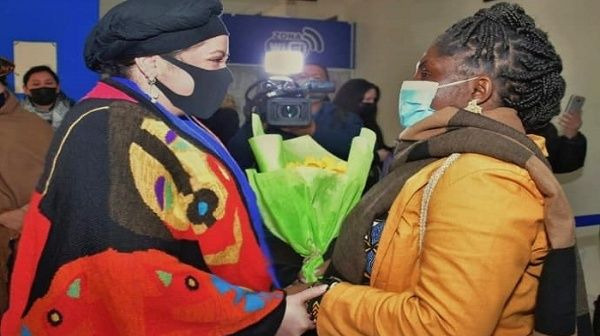 The Minister of the Presidency, María Nela Prada, and other authorities received Francia Márquez at the international airport in the city of El Alto. | Photo: María Nela Prada's Facebook page.

La Paz, August 1 (RHC)-- The vice-president-elect of Colombia, Francia Márquez, arrived this Sunday in Bolivia -- the final stop of a tour of South America in which she has addressed various issues, including regional integration.

The social leader was received at the international airport in the city of El Alto by the Minister of the Presidency, María Nela Prada, as well as by other authorities and representatives of Bolivian women's social organizations.

In addition, Prada stressed that it is a "great joy to receive her and through her to embrace brother President-elect Gustavo Petro and all the Colombian people.  Our Patria Grande is strengthened and our Matria Grande flourishes from the anti-patriarchal rebellion..

On her agenda, Francia Marquez foresees a meeting with the Bolivian vice-president, David Choquehuanca.   She will also be received by the head of state, Luis Arce, in addition to participating on Monday in a plurinational meeting with social organizations of indigenous and peasant women.

Previously, the Colombian politician traveled to Brazil, where she met with presidential candidate Luiz Inácio Lula da Silva, and then visited the presidents of Chile, Gabriel Boric, and Argentina, Alberto Fernández.  In Argentina, she also met with Vice President Cristina Fernández de Kirchner.

She will be officially sworn in as vice-president of Colombia, together with Gustavo Petro as president, on August 7th, following her victory in elections held on June 19th.

In this tour of South America, Marquez also held meetings with social leaders, human rights defenders and environmental activists, to whom she explained the projections and challenges of the next government and the commitment to peace.