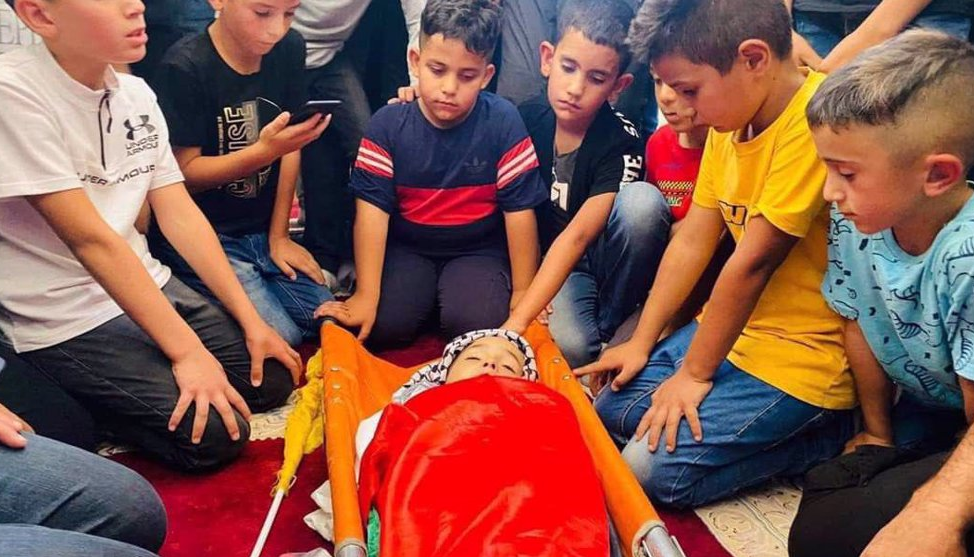 Ramallah, October 11 (RHC)-- A young Palestinian has died from wounds sustained nearly a fortnight ago when Israeli military forces carried out a raid in the northern West Bank, as tensions are escalating across the occupied territories due to Israeli military’s unabated repressive measures and acts of aggression.

The official Palestinian Wafa news agency, citing the Palestinian Health Ministry, identified the 12-year-old victim as Mahmoud Mohammad Samoudi.  It added that the Palestinian teenager was shot in the stomach on September 28, when four people were killed and at least 44 others injured during an Israeli military raid on a refugee camp in Jenin.

The men killed were identified as Ahmad Alawneh, Abed Hazem, Mohammad al-Wanneh and Mohammad Abu Naa’sah.  The al-Aqsa Martyrs' Brigades, a coalition of Palestinian resistance groups in the West Bank, said that three of the men killed were its members.

The UN special coordinator says at least 100 Palestinians killed by the Israeli forces in the occupied West Bank since the beginning of the year.  On Saturday, Israeli forces killed two Palestinian teenagers and injured nearly a dozen others during a raid on the Jenin refugee camp.

Wafa said at the time that undercover forces raided the camp, before Israeli military vehicles rolled into the site from multiple directions, sparking confrontations with local residents.  Israeli military forces also shot live rounds directly at a group of journalists covering the attack.

The Palestinian Ministry of Health said in a statement that Ahmad Mohammad Daraghmeh and Mahmoud as-Sous, both 17, were fatally shot in the head and neck respectively, while 11 others were injured during the Israeli army raid.

Those injured in the attack were rushed to nearby hospitals for medical treatment.  Israeli military forces also shot live rounds directly at a group of journalists covering the attack.  The attacks came hours after Israeli soldiers shot and killed two Palestinian teenagers in separate incidents in the occupied West Bank.

The Palestinian Health Ministry said troops shot Adel Ibrahim Adel Daoud, 14, with a live round in the head, in al-Birin area south of Qalqilya city.  Furthermore, Israeli soldiers killed Mahdi Mohammad Ladadwa, 17, from al-Mazra’a al-Gharbiyya village northwest of the central West Bank city of Ramallah, after Palestinians intercepted an attack by extremist Israeli settlers on a house in the village.

Israeli forces have recently been conducting overnight raids and killings in the northern occupied West Bank, mainly in the cities of Jenin and Nablus, where new groups of Palestinian resistance fighters have been formed.

More than 150 Palestinians have been killed by Israeli forces in the Israeli-occupied territories since the start of the year, including 51 in the besieged Gaza Strip during Israel’s three-day onslaught in August.