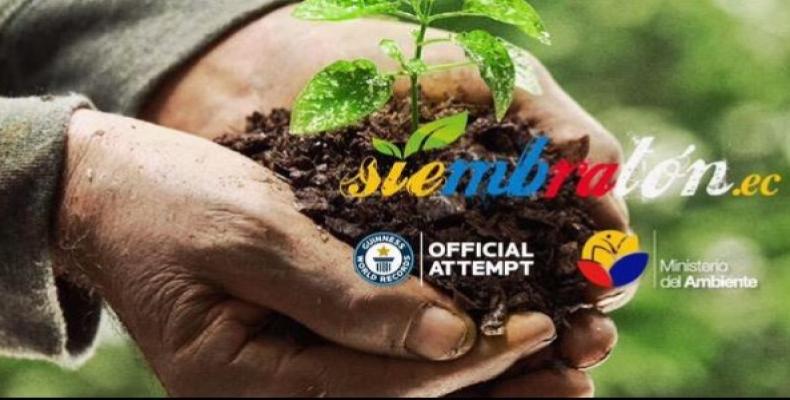 Quito, May 9 (teleSUR-RHC)-- The Ecuadorean government announced on Thursday it will mobilize 35,000 volunteers to plant more than 350,000 seeds in 150 locations across the country. The reforestation day is planned for May 16 and would break a World Guinness record. Up to date, there has yet to be an activity during which seeds are planted in this many different locations at the same time, according to director of the Latin-American branch of World Guinness Record Carlos Martinez.

“Ecuador is sending a historic message. It is showing the world that Ecuador is committed to the protection of the environment. It is also an invitation for citizens to act positively towards protecting the environment” said Environment Minister Lorena Tapia in an interview with Ecuador TV.

The Ecuadorean government has actively fought deforestation since Rafael Correa took the presidency in 2008. While the country was suffering an annual deforestation of 92.000 acres between 1990 and 2000, this has decreased to 47.000 acres since 2012.

“Behind this [reforestation day] is also a governmental policy that has been going on for years. There is an objective of reforestation to recover 50,000 acres by 2017” Tapia said. The Environment Minister indicated that the government has invested $74 million in projects of reforestation since 2008 and that it hopes to reach a level of “zero deforestation”, according to EFE.

The current record-holder in simultaneous reforestation is Turkey, which managed to gather 10,624 people to plant seeds at the same time.