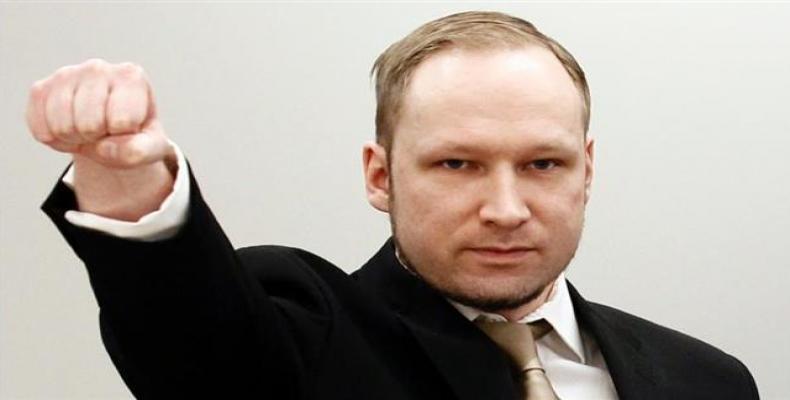 Oslo, July 23 (RHC)-- Norwegians have commemorated those who were killed in anti-Islam lone-wolf terrorist attacks that hit Oslo and Utoya in 2011. The Norwegian government also set up a controversial exhibition about the tragedy, putting on display several items used by far-right extremist Anders Behring Breivik on the ground floor of the same building where he started his rampage in the capital Oslo on Wednesday.

On July 22, 2011, Breivik detonated a 950-kilogram car bomb outside the office of the then Norwegian prime minster, current NATO chief Jens Stoltenberg. Eight people were killed in the incident.

Under the claim that he was fighting multiculturalism and a "Muslim invasion," he then opened fire on a Labor Party's youth wing gathering on the island of Utoya, killing another 69 people.

"The most important message today is that we have to continue to fight against hate rhetoric and extremism, and that future generations come here and learn about what happened," said Norwegian Prime Minister Erna Solberg after the opening ceremony of the event.

The exhibition displays items such as the remains of the explosives-filled van and faked identification documents that Breivik used in the attacks. Solberg added that the incident was Norway's "darkest day" and that its victims will always be remembered with love.

Meanwhile, the exhibition also sparked the anger of many online campaigners who say it will only increase the the killer's publicity. "A Breivik museum will probably be a feather in his cap," one campaigner said on Facebook.

"A Breivik museum in the government complex? No thank you. Send the goods to the National Museum of Justice in Trondheim instead," another campaigner said on Twitter.

Solberg denied such claims saying that she "didn't feel that the burned-out car made such a big impression. It just shows the power of the explosion."

Breivik, who has never shown any signs of remorse for his actions, was sentenced to a 21-year prison sentence in 2012.