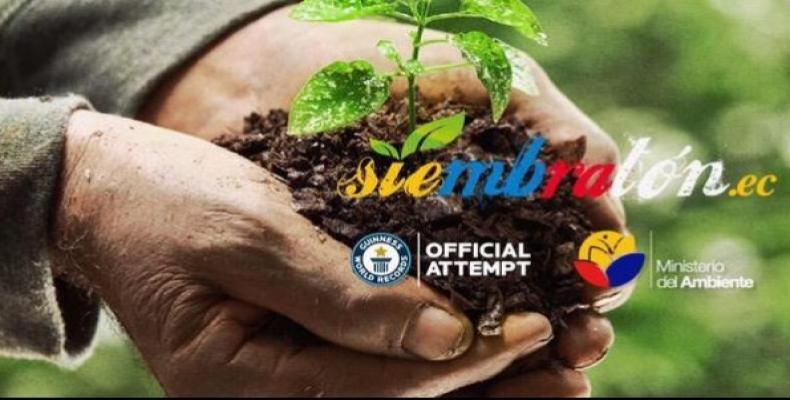 Quito, August 1 (teleSUR-RHC)-- Ecuador obtained its second certificate for breaking an environmental Guinness World Record on Thursday for mobilizing thousands of people to simultaneously plant seeds across the country on its reforestation day of action in May.

Ecuador’s “Siembraton,” a play on words with sembrar (plant) and marathon, broke a world record on May 16 by mobilizing more than 44,000 people to plant 647,250 trees across the country.

President Rafael Correa received a certificate recognizing the achievement in the rural parish of Cacha where he praised the indigenous people who were present at the event for their participation.

The Minister for the Environment and organizer of Siembraton Lorena Tapia also extended her thanks to the rural municipalities for their active participation.

The Ecuadorean government has actively combated deforestation since Rafael Correa's presidency in 2008. While the country was suffering annual deforestation of 92,000 acres between 1990 and 2000, this has almost halved, preserving over one million hectares of forest.

The Environment Minister indicated that the government has invested $74 million in reforestation projects since 2008 and that it hopes to reach a level of “zero deforestation.”

Rural areas have suffered significant deforestation rooted in historical decisions to plant eucalyptus in the highlands, where the indigenous people live. Eucalyptus, not native to the Andean region, has dried its soil causing water sources to go extinct.

Correa’s reforestation policy ensures the plantation of native species, which was symbolized in the Sembraton that saw an estimated 216 species of native trees planted.

Ecuador’s Siembraton wasn’t the first time the country has entered the Guinness Book of Records for its green credentials. In 2012 it won an entry for the most plastic bottles recycled in one week as part of an initiative to promote environmental awareness among children. Over 1 million bottles were collected weighing in at nearly 40,000 kg.