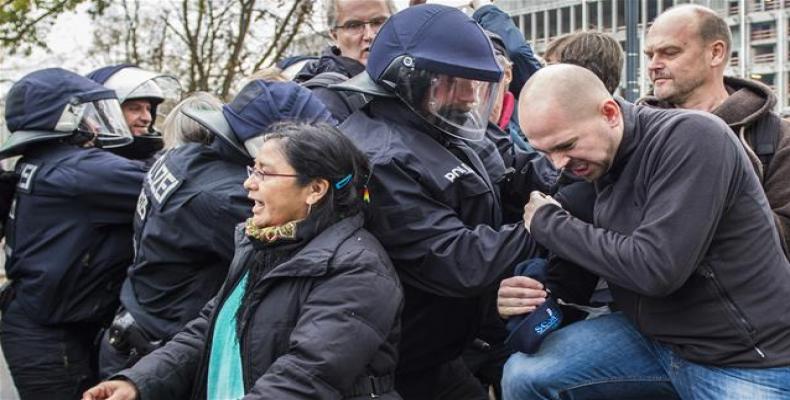 Berlin, November 9 (RHC)-- German Police forces have clashed with activists that waged a counter-rally to slam an anti-refugee demonstration in which thousands marched to protest Chancellor Angela Merkel's refugee policy.

Police authorities said their forces detained more than 40 people during the clashes that occurred Saturday in Berlin, where a police officer was slightly injured, AFP reported.

Police officials estimated that nearly 5,000 people showed up for the main anti-refugee protest march that was organized by the eurosceptic and populist-nationalist party Alternative for Germany (AfD) under the banner "Asylum Has Its Limits -- Red Card for Merkel."

The clashes broke out after police officers began attempts to dismantle a sit-in by counter-demonstrators, some of whom attempted to break through the barriers separating them from the anti-refugee protest rally. Police forces also intervened to prevent angry exchanges between rival protesters.

Those who took part at the protest march waved German flags and chanted slogans such as "Merkel must go" and "Traitor to the people." Five counter-demonstrations in favor of the asylum seekers drew nearly 800 activists although organizers said they had expected a turnout of several thousands.

This is while police authorities deployed a huge force of over 1,100 officers in the German capital to halt any potential trouble between the rival demonstrators.

Merkel has encountered increasing criticism over her position to welcome stranded foreign refugees fleeing foreign-backed wars and persecution as her country, which holds Europe's strongest economy, faces a record influx of nearly one million asylum seekers this year.