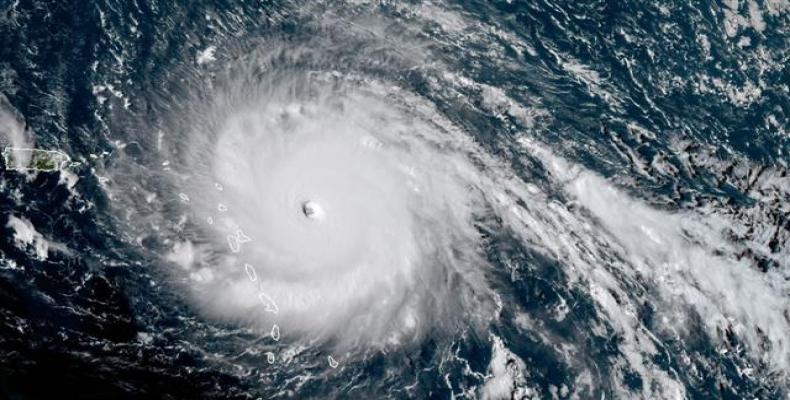 Havana, September 6 (RHC)-- Efforts are already underway all across Cuba to prevent damage and the loss of human life as Hurricane Irma approaches the country.

The country's National Civil Defense held its first meeting Tuesday. The meeting served to provide an update on the powerful storm's path and forecast, as well as establish measures to minimize its impact on the country.

National Civil Defense Chief of Staff, Division General Ramón Pardo Guerra, insisted on the importance of preparation efforts. He noted that Irma is by far stronger than Hurricane Ivan, which hit Cuba in 2004, forcing over two million people to evacuate.

The senior Cuban official insisted that “the population must be kept well-informed about Irma by the National Meteorological Institute's Weather Forecast Center, and that they should comply, in a disciplined manner, with measures as indicated by Civil Defense and local authorities.”  Forecasts indicate that Irma will pass along or very close to Cuba’s northern coast.

Hurricane Irma is now a Category 5 hurricane. Cuba is right in the storm’s path, with the latest trajectory showing Irma spending over a day above the 780-mile long island. Forecasters predict the storm could reach Cuba by Friday morning, with parts of the storm covering Cuba throughout the rest of the weekend.

The storm, with maximum sustained winds of 185 mph (295 km/h) and higher gusts, is regarded as an extremely dangerous category 5 hurricane on the Saffir-Simpson Hurricane Wind Scale. While some fluctuations in intensity are likely during the next day or two, Irma is forecast to remain a powerful category 4 or 5 hurricane during the next couple of days.

While Cuba is vulnerable to hurricanes due to its geographical location, the country is famously well-prepared. Even the United Nations once praised Cuba as a “model in Hurricane risk management” in 2004. Jacobin Magazine notes that only 35 Cubans have died from the last 17 hurricanes. Last year’s Hurricane Matthew didn’t kill anyone in Cuba, although it killed 271 people in nearby Haiti.

Before former U.S. President Barack Obama resumed diplomatic relations with Cuba, hurricane preparedness was one of the few things American and Cuban officials worked together on.

In Cuba, hurricane preparation plans, which are taught to children in schools, have saved countless lives.  Children are even taught to identify at-risk trees and hazards in their neighborhoods.

As the New York Times noted in 2013, during a storm, Cuban schools, hospitals and hotels become members of the National Civil Defense force and are responsible for caring for residents.