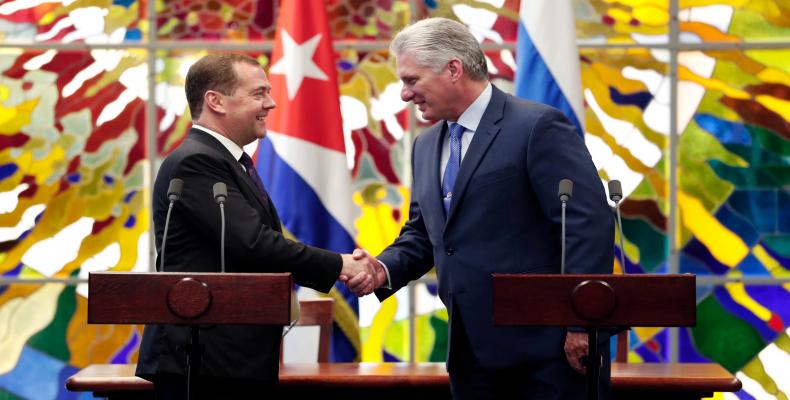 Havana, Oct 3 (RHC)— Cuban President Miguel Diaz-Canel announced Thursday that he will travel to Russia at the end of this month, and extended an invitation to his counterpart Vladimir Putin to visit the Caribbean island.

Following the signing of eight bilateral agreements at the Palace of the Revolution Diaz-Canel, in the presence of Russian Prime Minister Dmitri Medvedev, made public his trip to Moscow and invited Putin to Havana when his agenda permits.

Díaz-Canel stressed the will of both parties to deepen the ties and thanked Russia for its firm stance against the economic, commercial and financial blockade imposed by the United States almost six decades ago.

“Cuba condemns the expansion of the North Atlantic Treaty Organization towards Russian borders and the unjust and immoral sanctions that Washington and some of its allies imposed on this brother country since 2014,” said Díaz-Canel.

We have seen the progress of the effective participation of the Russian Federation in Cuba's economic development plan until 2030.

We also identified issues that we need to pay more attention to in order to achieve better results in economic, commercial and financial ties and cooperation," Diaz-Canel said.

The signing of eight important agreements shows the mutual will of Havana and Moscow, and in the current international context they will strengthen ties and be of benefit to both parties.

"Together with Diaz-Canel we have ratified our strategic alliance and the agreements signed are proof of this and speak for themselves," the Russian prime minister added.

Russia's business community is willing to collaborate in these efforts and the Russian state will support it, said Medvedev, who emphasized that Moscow will continue to support the Caribbean nation in all areas.

"The United States tightens its economic, commercial and financial blockade imposed almost six decades ago against Cuba and seeks to frighten businessmen who wish to invest here, but the resistance demonstrated during all this time by the Caribbean nation proves that the pressures fail.The policies of force here have no future," said the Russian Prime Minister.

"Moscow supports the demand that Washington end the economic, commercial and financial blockade of the island", Medvedev said, while recalling that Cuba has a loyal friend and a reliable partner in Russia.