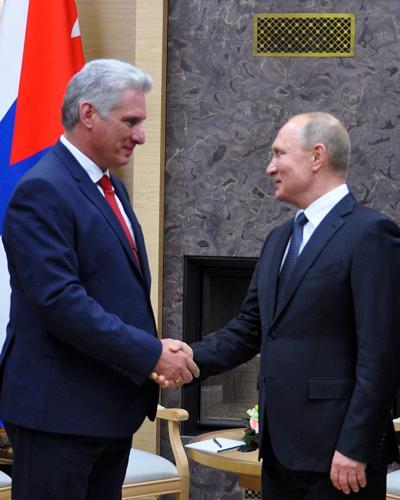 Moscow, October 29, (RHC)—The Presidents of Cuba, Miguel Diaz-Canel,  and of Russia,  Vladimir Putin, met this Tuesday at the Kremlin, as part of the Cuban leader's working visit to the Eurasian country.

The twitter account of the Presidency of Cuban Republic informed that the leaders ratified their coincidence on the central issues of the international agenda, and  Putin reiterated Russia's unconditional support to the struggle of Cuba for the lifting of the U.S. blockade.

Likewise, both leaders confirmed the advances in the economic-commercial projects.

The Cuban head of state also met Tuesday with the President of the Russian Government, Dimitri Medvedev. In the encounter, they reviewed the main results of the recent visit of the Russian leader to the Caribbean island. They ratified the will to continue working for the strengthening of bilateral ties.

During the meeting, Medvedev said that his visit to Cuba opened "new business perspectives" and recognized the progress of joint programs in transport, lighting, and metallurgical industry.

Earlier on the day, Diaz-Canel held a meeting with representatives of the Russian business community to whom he expressed the island's interest in expanding its exports of goods and services to Russia in sectors like biotechnology and pharmaceutics, fresh fruits, and other agricultural products.

The Cuban President invited the Russian entrepreneurs to participate with investments in the Mariel Special Development Zone and explore opportunities, especially in the fields of industry and energy. He also encouraged them to join the Habana 500 International Fair, to be held at the beginning of November.