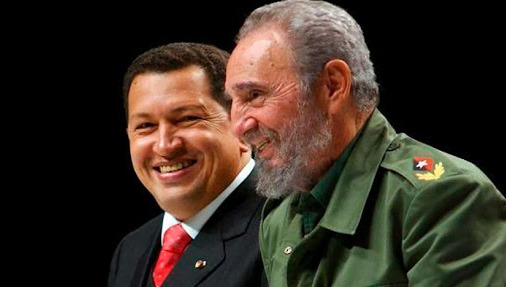 Hugo Chavez and Fidel Castro, the legendary
comnmanders of Venezuela and Cuba.

Havana, October 31 (RHC)--The president of the Republic of Cuba, Miguel Díaz-Canel, assured that 20 years after the establishment of the Comprehensive Cooperation Agreement between Cuba and Venezuela, "what it has given us is teaching and learning for collaboration among peoples.

In his address at a virtual forum to celebrate this anniversary (October 30), the Cuban leader told his Bolivarian counterpart Nicolás Maduro that "we are thrilled to commemorate this historic moment with our Venezuelan brothers."

"When one sees that in the world all the neoliberal paradigms are collapsing, we see that there is another paradigm, the one we defend, the one that has given positive results in the face of the pandemic that humanity is facing," said Díaz-Canel.

He assured that it is not accidental that imperialism resorts to similar tools of threat, blockade, and fury against our causes in the presence of the perseverance of peoples like ours.

Image of the Virtual meeting held on Friday

Diaz-Canel also recalled some of the crucial moments played by the two peoples as part of this Agreement and highlighted the training of Latin American students, mostly Venezuelans, in the career of Medicine.

The Cuban dignitary highlighted the importance of the integrating vision of Commander in Chief Fidel Castro and Commander Hugo Chávez to construct a better Latin American society, based on ethics and respect above any other consideration the sovereignty of nations.

He also referred to the solidarity character of the Cuban missions in the Bolivarian nation, with the sole purpose of providing its people with the necessary help and knowledge to develop their health system.

Díaz-Canel ratified that Cuba's decision to maintain its collaboration with Bolivar's land is unaltered despite Washington's continuous limitations.

The Comprehensive Cooperation Agreement was signed in Caracas to strengthen the bonds of friendship between the two countries, promoting and fostering the progress of their respective economies, the reciprocal advantages of cooperation for the economic and social advancement of the integration of Latin America and the Caribbean.

It also laid the foundations and principles for the Bolivarian Alliance for the Peoples of America - People's Trade Treaty, a regional international organization founded in December 2004.