Cuban government thanks U.S. agencies for their solidarity in the fight against Covid-19 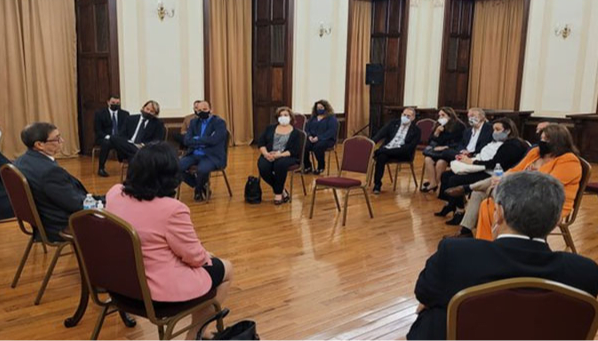 Havana, Sep 29 (RHC) On Wednesday, a diplomatic source informed that Cuban Foreign Minister Bruno Rodriguez expressed his gratitude for the solidarity of travel agencies and charters in the United States in the fight against the COVID-19 pandemic.

In his official Twitter account, Ernesto Soberon, General Director of Consular Affairs and Attention to Cubans Living Abroad at the Foreign Ministry, reported on a meeting between the Cuban Minister and representatives of those firms.

During the meeting, Rodriguez expressed gratitude for the support of such actors to the campaigns for the immunization of the Caribbean people. Cuba is the Latin American nation with the highest percentage of its population (80.9) that has received at least one dose of some vaccine against COVID-19.

In the social network Twitter, Soberón recalled that 'Cuban families have the right to receive remittances without politicization or manipulation of this issue, and even more so in the current pandemic conditions', an issue used by Washington in its hostility against our country.

In addition, the official emphasized that the obstacles currently faced by those born in the island territory who wish to visit or emigrate to the United States, constitute a violation of their rights and harm their intentions of reunification and the links between relatives.

Recently, the Foreign Minister spoke with young activists of The People's Forum, whom he thanked for their solidarity with the island against the U.S. blockade imposed for almost six decades.

These exchanges took place in the context of the visit of the head of diplomacy to New York City to participate in the 76th session of the United Nations General Assembly, which concluded the day before.

According to statements made by the Ministry of Foreign Affairs, Cuba is willing to promote opportunities for its nationals living abroad to contribute to the country, but obstacles such as the blockade prevent investments.

According to Soberon, the possible participation in socio-economic development processes in the nation in initiatives related to the private sector and local development projects and for cooperation opens a door in the relations between the island and those living in other latitudes. (Source: ACN)