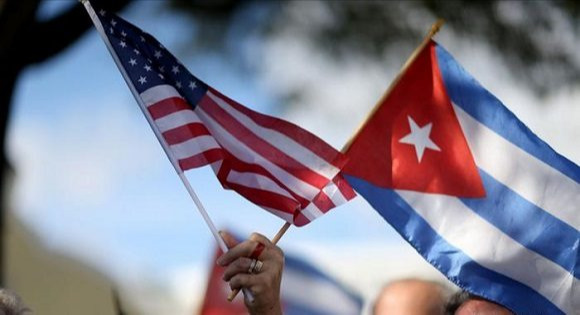 Washington D.C. December 16 (RHC)-- On the eve of the seventh anniversary of the reestablishment of diplomatic relations between Cuba and the United States, a large group of members of Congress sent a letter to President Joe Biden, asking him to change the course he has maintained in bilateral ties.

They ask the President to promote a Cuba policy that addresses humanitarian needs, the economic crisis, and engagement in areas of mutual interest.

The signatories, more than half of the Democrats in the House of Representatives, demanded the restoration of the path to normalization and the reversal of Trump's policies and sanctions.

"The current humanitarian situation in Cuba is growing ever more dire, with shortages of food and goods and decreasing access to medical supplies amid the COVID-19 pandemic. We urge you to take immediate humanitarian actions – as the United Nations has urged repeatedly – to suspend U.S. regulations that prevent food, medicine, and other humanitarian assistance from reaching the Cuban people. We also support a more comprehensive shift to deepen engagement with Cuba and move towards normalization of U.S.-Cuba relation," the letter states.

The representatives point out that in practice, licensing requirements, end-use verification, restrictions on the banking sector, and fear of unknowingly running afoul of U.S. law severely complicate sending humanitarian aid to Cuba, from other countries as well as from the United States.

In addition, the Trump administration's policy of restricting family remittances remains in place, preventing Cuban Americans from helping their own families during the pandemic.

"Trump's 'maximum pressure campaign' remains in place, with restrictions on remittances and travel, sanctions on the banking and tourism industries, and Cuba's inclusion on the list of state sponsors of terrorism. It is encouraging that Democrats in Congress are pushing the Biden Administration to right these wrongs," said Codepink co-founder Medea Benjamin.

The representatives call for bilateral engagement on migration, environment, security, and health. They also point out that communications and internet access increased due to the policy of engagement under the Obama Administration.

"The Obama Administration's Cuba policy was very popular, not only among Americans in general but also within the Cuban American community. This letter is an important breakthrough on Capitol Hill and will hopefully spur President Biden to fulfill his campaign promise to normalize relations with Cuba," said Angelica Salazar of ACERE,  the Alliance for Cuba Engagement and Respect, a solidarity group seeking to end the blockade of Cuba.

ACERE -affiliated organizations and individuals across the country worked tirelessly to bring the letter to the attention of Representatives and encourage them to sign on, including Codepink, Just Foreign Policy, Global Health Partners, Latin America Solidarity Committee, Building Relations with Cuban Labor, Solidarity Collective and Minnesota Cuba Committee.