“Summit of the Americas: Imperialist domination and exclusion” 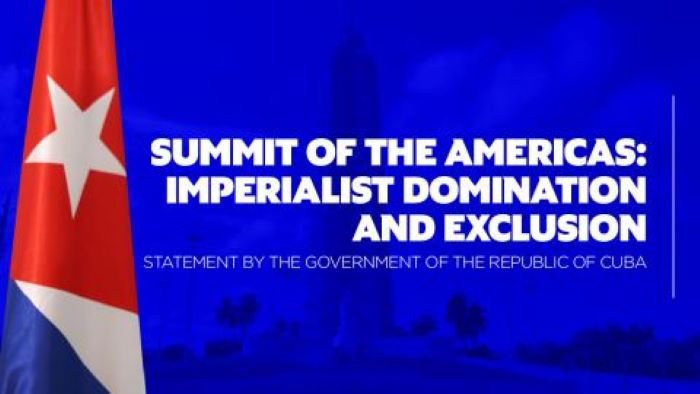 Havana, June 6 (RHC)-- The Government of Cuba described the exclusions at the Summit of the Americas, taking place as of Mondayi n Los Angeles, as anti-democratic and arbitrary. Radio Havana Cuba brings the full text of a statement of the island's authorities on the issue.

Statement by the Revolutionary Government

Havana, June 6th, 2022.- The US Government, abusing its privilege of being the host country, decided at a very early stage to exclude Cuba, Venezuela and Nicaragua from the 9th Summit of the Americas to be held in the city of Los Angeles this month of June.  It has refused to attend to the just claims of many governments to change that discriminatory and unacceptable stand.

There is no single reason that justifies the anti-democratic and arbitrary exclusion of any country of the hemisphere from this continental meeting, as warned by the Latin American and Caribbean nations at the 6th Summit held in Cartagena de Indias in 2012.

President Miguel Díaz-Canel Bermúdez announced last May 25 that he would not attend the meeting.  This was Cuba’s final decision if all countries of the hemisphere were not convened on an equal footing.

Arrogance, fear of inconvenient truths being voiced, determination to prevent the meeting from discussing the most pressing and complex issues in the hemisphere, and the contradictions of its own feeble and polarized political system are behind the US government’s decision to once again resort to exclusion in order to hold a meeting with no concrete contributions yet beneficial for imperialism’s image.

It is a well-known fact that the US Government has engaged in intensive high-level efforts with governments of the region seeking to reverse the intention of many of not attending the meeting unless all countries are invited. Such efforts included immoral pressure, blackmail, threats and dirty deceptive maneuvers.  These are all common practices that reflect imperialism’s traditional disdain for our countries and deserve the strongest rejection.

Cuba appreciates and respects the honorable, brave and legitimate stand of many governments in defense of the full and equal participation of all countries.

The leadership of Mexican president Andres Manuel Lopez Obrador deserves special recognition. We highlight the clear stand of CARICOM member countries from the outset against such exclusions, as well as the firm stance of Bolivian president Luis Arce Catacora and of the president of Honduras Xiomara Castro. The position of Argentine as chairman of CELAC expresses the majority view of the region against a selective Summit, as expressed, both publicly and in private, by many governments of South and Central America.

Such genuine and spontaneous solidarity in reaction to this US discriminatory action against countries of the region reflects the sentiment of the peoples of Our America. The United States underestimated the support Cuba enjoys in the region, when it attempted to impose its unilateral and universally rejected hostile policy towards Cuba as a consensus regional position, however, the debate on the invitation process proved them wrong.

The 21st ALBA Summit held in Havana last May 27, showed the unequivocal repudiation of exclusions and discriminatory and selective treatment.

Such exclusions confirm that the United States conceived and uses this high-level dialogue mechanism as an instrument to further its hegemonic system in the hemisphere, just like the Organization of American States (OAS), the Inter-American Treaty of Reciprocal Assistance (TIAR) and other bodies established in the 20th century to curb independence, limit the sovereignty of nations in the region and thwart Latin American and Caribbean unity and integration aspirations.

They are part of the efforts to implement the Monroe Doctrine and promote exclusion as a dividing strategy for clear political, electoral and domination purposes.

One cannot speak of “The Americas” without including all the countries of the hemisphere.  Our region demands cooperation, not exclusion; solidarity, not meanness; respect, not arrogance; sovereignty and self-determination, not subordination.

It is known that the documents to be adopted at Los Angeles are completely divorced from the real problems facing the region and that beyond the effort to grant the OAS supranational prerogatives to decide upon the legitimacy of electoral processes and to compel Latin American and Caribbean governments to impose repressive, discriminatory and excluding actions against migrants, these documents are useless and vague.

We know that, like in the past, the voice of Latin America and the Caribbean will resound during those days in Los Angeles with the admirable and principled absence of relevant leaders who enjoy political and moral authority and the recognition of their people and the world.

We are also fully confident that the leaders of the region, who choose to attend, will argue with dignity that the United States cannot treat our peoples as they used to in the 20th century.

Cuba supports the genuine efforts to promote integration throughout the hemisphere based on civilized coexistence, peace, respect for diversity and solidarity. Cuba has a widely acknowledged record of unreserved support and contribution to all legitimate proposals for actual and concrete solutions to the most pressing problems faced by our peoples. The reality we are presented with today is far from such aspirations.