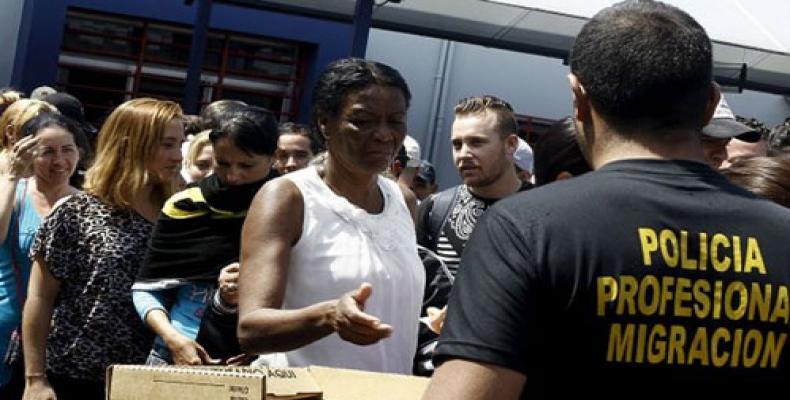 Havana, November 23 (RHC)-- The situation of the over 2,000 Cubans stranded in Costa Rica could be described as calm and tense at the same time as they hope that tomorrow's Central American and Caribbean Ministerial Forum finds a solution to their case.

Meanwhile, La Nacion newspaper said the emigrants are in good health and hopeful to receive good news out of a meeting of foreign ministers of Central America and the Caribbean scheduled for Tuesday, with Cuba, Mexico, Ecuador and Colombia as guests.

The over 2,000 Cubans are in shelters set up by Costa Rican authorities, the Red Cross and local churches, who are providing drinking water, food and medical attention, according to some relatives in Cuba who spoke with the Cuban News Agency.

The Cubans left the island legally for various South American nations, like Ecuador, and from there made it to Colombia and Panama to finally arrive in Costa Rica in route to the United States encouraged by the U.S. "dry-feet, wet-feet" policy and the Cuban Adjustment Act.

In a telephone conversation with the Cuban News Agency from Washington, lawyer Jose Pertierra said that it is common for Latin Americans to migrate to the U.S., since the living standard there is much higher than in the rest of the continent.

But in the case of the Cubans, the U.S. "dry-feet, wet-feet" policy and the Cuban Adjustment Act give them differentiated treatment if compared to other Latino immigrants. Under the act, Cubans immediately become eligible for food and housing, medical insurance and are granted the green card or permanent residence one year later.

In this context, U.S. ambassador to Nicaragua, Laura Dogu recently said that her country will welcome the Cubans if they make it to U.S. territory.

According to Pew Research, a D.C-based Think Tank, from October 2014 to July this year, 27,296 Cubans entered U.S. territory, with two-thirds of them passing through the Mexican border.

The Consular Affairs Division at the Cuban Foreign Ministry reiterated that the Cuban embassy in San Jose, Costa Rica, is following the situation of the migrants and that it has provided Costa Rican immigration authorities with the documents that some Cubans did not possess.