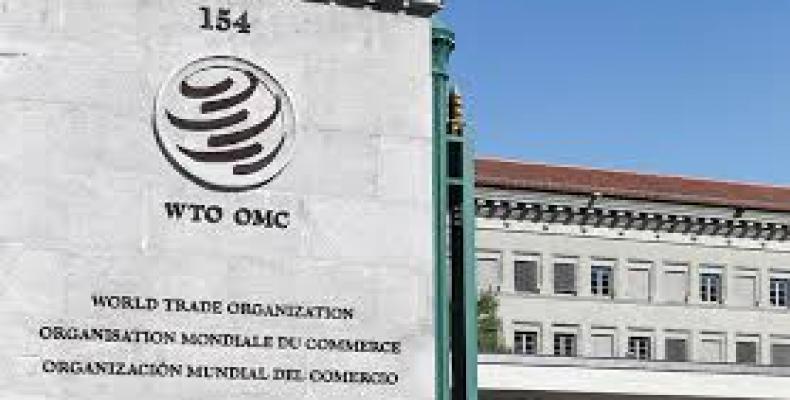 Geneva, May 4 (RHC)-- At the Geneva-based World Trade Organization (WTO), Cuba denounced the further tightening of the U.S. blockade policy against the Caribbean state, following the activation this past May 2nd of Title III of the Helms-Burton Law of 1996.

Addressing the WTO Trade Negotiations Committee, Cuban ambassador in Geneva Pedro Luis Pedroso said it is an escalation of Washington’s aggression. He insisted that the aim is to hamper Cuba’s development efforts by punishing companies and nationals from third countries that do business with Cuba, thus discouraging foreign investment in the Caribbean state.

The senior Cuban diplomat recalled that the Helms-Burton Law runs contrary to the principles enshrined in the UN Charter and International Law, as well as WTO norms and regulations.

Title III of the Helms-Burton grants a green light to U.S. citizens who wish to file lawsuit in U.S. Courts against Cuban and foreign entities that do business on properties nationalized in Cuba after the 1959 Revolution.  Cuba has repeatedly claimed that the nationalizations were conducted in full compliance with Cuban and international law.

Cuba offered due compensation to former owners of the nationalized properties, which nationals from countries other than the U.S. accepted, but the U.S. side refused to accept on the false belief that the Revolution would not last long.

The Cuban ambassador in Geneva further explained that most U.S. citizens, who are today filing claims under Title III of the Helms-Burton were actually Cuban citizens at the time of the nationalizations and only became U.S. citizens several years later, and so U.S. courts have no jurisdiction whatsoever over those cases.

The Helms-Burton Law is a ‘legal aberration’, said the Cuban senior diplomat and recalled that since its enactment in March 1996, consecutive U.S. administrations, including the Trump White House during its first two years, had postponed implementation of Title III, which even Washington’s closest allies have blasted as extraterritorial and illegal.  The EU, Canada and Mexico have all threatened to retaliate, even take the U.S. at the WTO, if the interests of their nationals and companies are, in any way, affected by the U.S. piece of legislation.

The Cuban ambassador in Geneva renewed Cuba’s determination to honoring its commitments with its foreign economic partners. He stressed that foreign investors are backed and protected by Cuban and International Law and the law of their own respective country.

Ambassador Pedroso further charged that Cuba will never renounce its defense of multi-lateralism at WTO, UN and all international forums and agencies, based on strict respect for the countries’ sovereignty, independence and people’s self-determination.