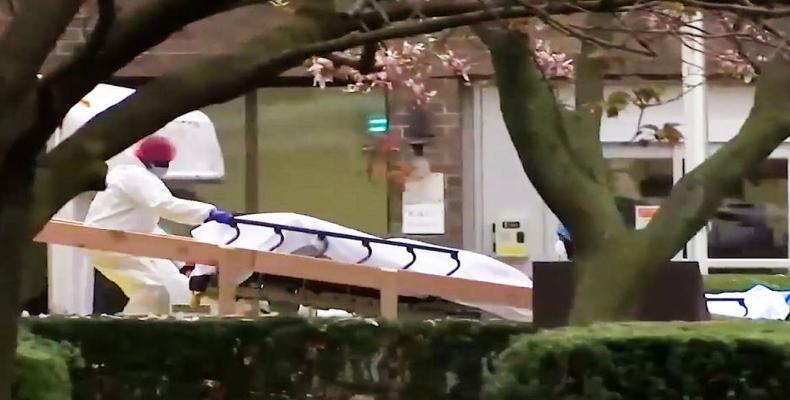 Washington, January 13 (RHC)-- The daily COVID-19 death toll in the United States hit a record 4,327 on Tuesday, according to a Johns Hopkins University tally, as the Trump administration moved to accelerate the roll-out of vaccinations across the country.

The U.S. daily death toll first surpassed 4,000 on January 8, amid a marked increase following a holiday season that saw widespread travel.  With a total of 382,624 deaths, the United States has the highest toll in the world and it has also reported the highest number of infections, with 22,959,610 confirmed cases of COVID-19, according to Johns Hopkins.

In an effort to speed up the distribution and administration of vaccines, the Trump administration on Tuesday released the rest of the doses it had been keeping in reserve and recommended states immediately open inoculations to those aged 65 and over.

Federal and state health officials have scrambled in recent days to step up vaccination programmes that had given shots to only 9.3 million Americans as coronavirus infections remain at record highs in many US states nearly two weeks into the new year.

Many U.S. states had strict rules in place giving shots to healthcare workers and nursing home residents first, telling “non-essential workers” they might wait months for their turn.  “We’ve already distributed more vaccine than we have healthcare workers and people in nursing homes,” US Health and Human Services Secretary Alex Azar told ABC News.  “We’ve got to get to more channels of administration.”

The Centers for Disease Control and Prevention’s tracking of distribution on Wednesday showed that 10,278,462 doses of the jab have been administered as of Wednesday, of a total of 29,380,125 distributed doses.  The U.S. had set a goal of administering 20 million vaccines before the end of 2020.

Azar said the outgoing administration, which had been keeping doses in reserve to make sure that all those who got a first inoculation receive their second shot on schedule, was now confident enough in the supply chain to release that stockpile.

Last week, a spokesman for President-elect Joe Biden, who takes office on January 20, said the incoming administration would release more of the reserved doses. The Biden team made the announcement after eight Democratic state governors wrote a letter to the Trump administration urging it to release more reserved vaccines.

The pace of vaccinations has risen to 700,000 a day nationwide and was expected to hit one million a day within 10 days, officials said.  “Michigan and states across the country remain ready to get more shots in arms, which is why the Trump Administration’s decision to grant our request and release millions of doses of the vaccine is so crucial,” Michigan Governor Gretchen Whitmer said in a statement.

Whitmer, who had backed the lower vaccination age, is seeking permission from the U.S. government to buy 100,000 vaccine doses directly from manufacturer Pfizer.

Amid mounting criticism over the roll-out of the vaccine in New York state, Governor Andrew Cuomo announced last week that New York would allow a much wider swath of the public to get inoculated, including anyone 75 or older, teachers and first responders.

Cuomo said on Tuesday that vaccinations would broaden to people 65 and older and younger people who are immunocompromised.  “I don’t want New Yorkers to think that we are not doing everything we can to make them eligible for the vaccine, because I want to keep people in New York as calm as we can keep people in these anxious times”, Cuomo said in a Tuesday conference call with reporters.