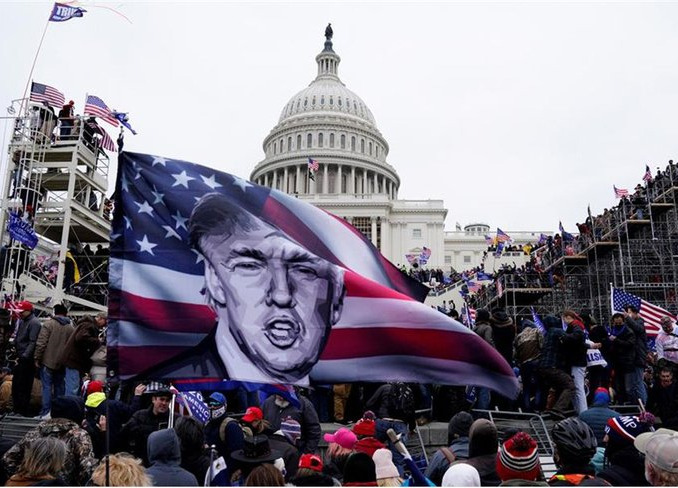 FBI says more than 100,000 ‘pieces of digital media’ are being examined to identify suspects in riot at US Capitol

More than 70 charges ranging from misdemeanour trespassing to felony arms charges have also been filed to date, the FBI’s Assistant Director in Charge of the Washington Field Office Steven D’Antuono told reporters during a Tuesday afternoon news briefing.  “We have received more than 100,000 pieces of digital media.  We are scouring every one for investigative and intelligence leads,” D’Antuono said.

A pro-Trump mob breached the Capitol building on January 6 as a joint session of Congress met to certify President-elect Joe Biden’s election victory. Five people, including a Washington, DC police officer, died in the incident.

Trump has faced widespread calls to resign for inciting his supporters in a speech before the Capitol was breached, but he remained defiant this week, shirking responsibility for what took place and rejecting a push by Democrats to impeach him.  He said there was a “tremendous anger” about Congress’ impeachment efforts, which could happen as soon as Wednesday, and called it a “continuation of the greatest witch hunt in the history of politics.”

Since the riot, social media giants Twitter and Facebook have permanently suspended Trump’s accounts on their platforms to stop further incitement.  Acting U.S. Attorney for the District of Columbia Michael Sherwin, who is working with the FBI to apprehend and charge alleged rioters, said at the news conference that the 70 charges levied so far are “only the beginning.”  “That number is going to grow into the hundreds,” Sherwin said.

He added that a task force is investigating possible charges of conspiracy and sedition, on top of those already filed.  “Given the enormity of the actors we saw … the range of criminal conduct is unmatched,” he said.

“The FBI and the Department of Justice [are] treating the Capitol, both its grounds and inside, as a crime scene,” Hanna reported, adding that the probe would likely take months – if not longer.  D’Antuono said the FBI would continue to work with local law enforcement and the bureau’s field agents across the U.S. to apprehend suspects.  “Even if you’ve left DC, agents from our local field offices will be knocking on your door,” he said.

Meanwhile, the U.S. military’s Joint Chiefs of Staff said in a joint message on Tuesday that the riot “was a direct assault” on the U.S. Congress, the Capitol building and the country’s Constitutional process, the Reuters news agency reported.

In an internal memo to troops, the seven generals and one admiral said the US military remained committed to protecting and defending the Constitution and that Biden would be inaugurated on January 20th.  “The rights of freedom of speech and assembly do not give anyone the right to resort to violence, sedition and insurrection,” the memo, seen by Reuters, stated.

“Any act to disrupt the Constitutional process is not only against our traditions, values, and oath; it is against the law.”

The FBI on Monday warned of possible armed protests in all 50 states and the US capital in the days leading up to Biden’s inauguration.  Trump has now authorized a state of emergency declaration for Washington, DC in response to the situation.