Millions of Cubans march to celebrate May Day Havana, May 1 (RHC)-- Millions of Cubans from different generations marched on the island’s main squares and thoroughfares to celebrate International Workers' Day.

This year, Cuban workers are voicing their support for the Revolution, their rejection of the U.S. economic blockade, their solidarity with Venezuela and the commitment for the economic and social development of the island.

The celebration began island-wide at 7 am.   In Havana, it was presided over by the Cuban Communist Party leader, Raul Castro Ruz, and the president, Miguel Diaz Canel Bermudez.

Some 1400 Cuba solidarity activists from 103 countries and 140 solidarity organizations from all over the world joined the Cuban people at Revolution Square in Havana.

The begining of the march was preceded by the Concept of Revolution, stated by the historic leader of the Revolution Fidel Castro on this same date in the year 2000. 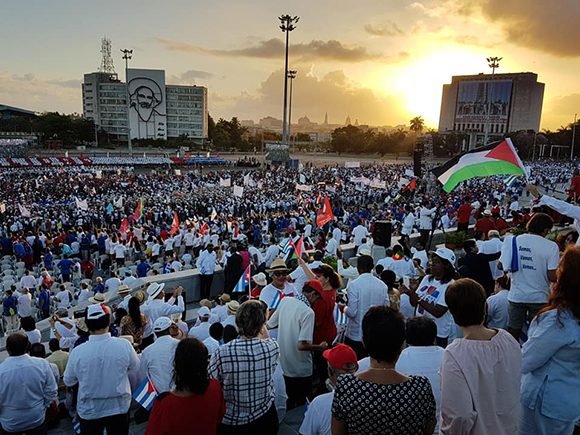 The Cuban Five, Heroes of the Republic of Cuba, also joined the Cuban workers celebration.