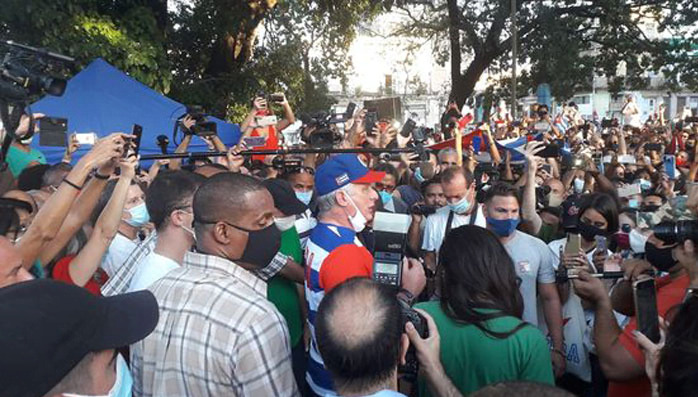 Havana, November 29 (RHC) Cuban President Miguel Díaz Canel, participated on Sunday in a rally in support of the Revolution and in favor of socialist democracy in Havana's Trillo Park.

The Revolution has always called on young people. In our visits to the provinces, we always have meetings with young people who have written a page of altruism in the confrontation of Covid-19," said the President, who appeared unexpectedly to support the youth meeting.

The demonstration, convened as a "tangana," in remembrance of the name of the surprise protests held by progressive Cuban youth of previous generations, gathered students, artists, workers, and athletes.

They condemned recent media attempts from the United States to destabilize the political process in Cuba.

Addressing the crowd,  Díaz Canel stated that the instigators believed they could destroy the Revolution before the end of the Trump administration, but their hope will not come true.

The President stressed that there are space and dialogue in Cuba to improve and perfect socialism and the Revolution without external interferences of any kind.

During the concert rally, the participants endorsed their commitment to open dialogue and defend the Cuban Revolution's achievements in the struggles for gender, racial equality, and in favor of the LGBT community.

We are brought together by revolutionary spontaneity and leftist political sensibility. We decided to undertake this action because the struggle for democracy and freedom is inherent in the socialist process of  Cuba, they exclaimed amidst songs and calls in favor of the Revolution.

“We ask that the profound rejection of mercenaries be placed on the table of dialogue. The solution is not to encourage feelings of discontent or annexationist support, “said a young journalism student.

They emphasized that institutions are also the people who work in them and cannot become an obstacle and antipode of this struggle. “We cannot be allowed to be divided,” they stressed.

The youth call denounced the waging of a media campaign against the island as part of a soft coup détat scrip financed by the United States through the funding of subversive groups such as the so-called San Isidro Movement.