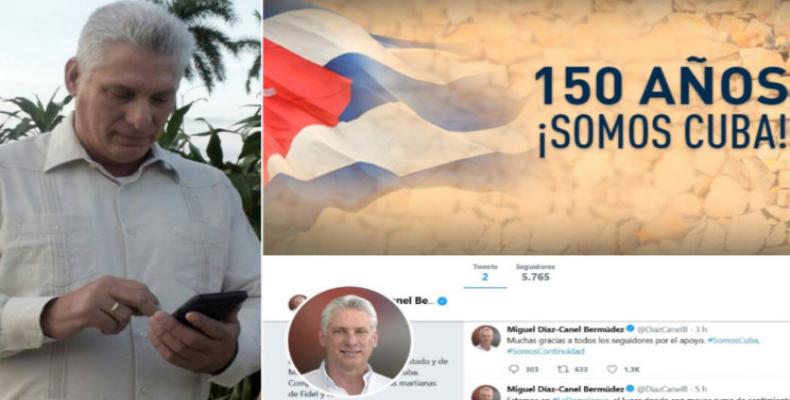 Havana, April 16 (RHC)-- Cuban Miguel Díaz-Canel has recalled the humanitarian, inclusive and socialist character of the Revolution led by Fidel Castro through a message on the social network Twitter.

In his account @DiazCanelB the president wrote: Cuba reiterates today, April 16, what stood 58 years ago: 'for this Revolution of the humble and for the humble, we are ready to give our lives.'

In another tweet, Díaz-Canel recalled words of Fidel Castro when he said: '... they can not forgive us for... making a socialist Revolution under the very nose of the United States!'

For his part, Cuban Foreign Minister Bruno Rodríguez  he stressed on twitter the validity of that speech offered by Fidel Castro almost 60 years ago at the intersection of 23rd. avenue and 12th. street, in Vedado. There Fidel Said: "What the imperialists can not forgive us for is the dignity, the integrity, the courage, the ideological firmness, the spirit of sacrifice and the revolutionary spirit of the people of Cuba.

The socialist character of the Cuban Revolution was declared by its maximum leader on April 16, 1961 during the funeral honors of the victims of the bombing of different areas of Cuba.

A day earlier, enemy planes camouflaged with the insignia of the Revolutionary Armed Forces had attacked the airport of Ciudad Libertad, the air base of San Antonio de los Baños and the airport of Santiago de Cuba.

This action was the prelude to the invasion of Playa Girón in the central province of Matanzas, where an armed brigade, trained and transported by the United States, entered the Zapata Swamp on April 17.

After 60 hours of hard fighting the mercenaries were defeated, and they surrendered in  at dusk on the 19th. According to Fidel Castro this action represented "the first great defeat of imperialism in Latin America."

President Miguel Diaz-Canel has pointed to The Lima Group reiterating its interventionist intentions against the Venezuelan government alleging a negative influence of Cuba.

Through his Twitter account, the president clarifies that the perverse group that emerged in 2017 follows the instructions of the government of the United States. Diaz-Canel wrote: "Our answer is Dignity against the Monroe Doctrine."

In a 17-point statement on the 15th. of April The Lima Group indicated its aggressive position against Venezuela and proposed that other countries and institutions join its effort to overthrow the the government of that country.

The document was signed in Santiago de Chile by representatives of the governments of Argentina, Brazil, Canada, Chile, Colombia, Costa Rica, Guatemala, Honduras, Panama, Paraguay and Peru and the illegal National Assembly of Venezuela.