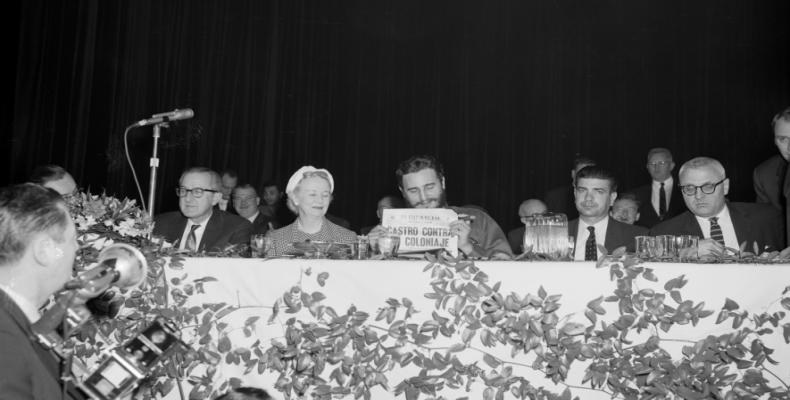 The Cuban Revolution and the National Bourgeoisie

In today’s episode of Imperialism and Revolution, we look at the revolutionary liquidation of the Cuban national industrial bourgeoisie.

The first property expropriations were enacted on February 28, 1959. They involved confiscations of the properties of Cuban nationals associated with the Batista regime, and as such, they were not directed against the interests of the national bourgeoisie as a class. The second act of expropriation was the nationalization of large-scale agricultural lands, making no distinction between foreign-owned and Cuban-owned land. The Agrarian Reform Law of May 17, 1959 adversely affected the interests of foreign capital and the national estate bourgeoisie, but it did not directly affect the interests of the national industrial bourgeoisie. The Agrarian Reform Law, which distributed land to peasants under different structures of property ownership, was necessary for breaking the neocolonial relation and providing the structural foundation for the social and economic development of the nation.

The concept of agrarian reform as a foundation for industrial and agricultural development did not imply a step toward the elimination of national big industry. In the ceremony signing the Agrarian Reform Law, Fidel observed that when the landholders receive money for their agrarian reform bonds in twenty years, they will be able to invest it in industry. In a banquet for businesspersons on August 27, 1959, Fidel spoke of the importance of developing national industry. He declared that businesspersons are among the people who are called to defend the Cuban Revolution, and he invited them to patriotism. On September 13, 1959, Fidel spoke of the importance of investing in machinery and in new factories to increase production, observing that such investment could be made by private industry or by the state. The Cuban owners of industry, Fidel noted, also could put their profits in Cuban banks, inasmuch as bank reserves could be used by the state to invest in production.

However, the unfolding revolutionary process demonstrated that the Cuban industrial bourgeoisie was unable to free itself from its subordination to the United States. It was dependent on U.S. capital, and it was too weak economically and ideologically to find common cause with the nationalist economic measures of the Revolution.

Accordingly, from mid-1959 to mid-1960, members of the national industrial bourgeoisie left the country and/or participated in the counterrevolution in increasing numbers. On July 6, 1960, Fidel observed that the unfolding revolutionary process is demonstrating that the great international interests and the privileged interests within the nation are allies. “The Revolution is teaching us that those who had control of the nation in their hands are inclined to submission to foreign interests and to treason,” deserting the nation in increasing numbers with each revolutionary measure. They know, he stated, that the Revolution has struck at the interests of the foreign power, and therefore they place their hopes in the support of those foreign interests.

The counterrevolutionary comportment of the national bourgeoisie accelerated in July and August of 1960, as the Revolutionary Government nationalized key U.S. properties. By August 1960, the great majority of Cuban industrialists were undermining production in various ways: they channeled funds away from operating costs and production in order to export capital; they abandoned management of their companies; and they financed subversive groups and engaged in illegal and counterrevolutionary activities.

On September 8, 1960, Fidel declared that the government does not want to nationalize Cuban companies, because the country does not have sufficient numbers of trained administrators, and the state has more than enough administrative work as a result of the confiscations for criminal behavior and the nationalizations of foreign companies. However, he observed, the counterrevolutionary attitude of Cuban proprietors sometimes obligates the government to intervene.

With the big industrialists and merchants actively undermining the revolutionary project, the Revolutionary Government declared on October 13, 1960 that its duty was “to take measures that the circumstances required and to adopt methods that would definitively liquidate the economic power of the privileged interests that conspire against the people, proceeding to the nationalization of the large industrial and commercial enterprises that have not adapted to the revolutionary reality of our country.” On October 13 and 14, 1960, the Revolutionary Government emitted three laws authorizing the nationalization, with compensation, of Cuban owned properties in big industry and commerce, banking, and housing.

On November 8, 1960, Fidel declared that there will be not be further nationalizations, except in cases in which the owners have abandoned the country. Notwithstanding, Cuban industrialists not affected by the October 13 nationalizations increasingly emigrated and displayed comportment inconsistent with the national economic goals. On July 26, 1961, Fidel noted that virtually all of the big industrialists had left the country. On June 27, the Revolutionary Government emitted a law that authorized the nationalization of more companies in accordance with the principles of the October 13 law, and on this legal basis, nine resolutions nationalizing 842 companies were issued from June 30, 1961 to July 27, 1962.