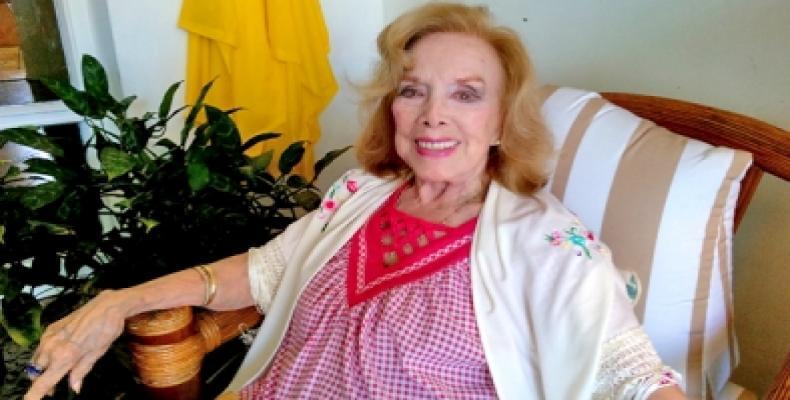 Havana, June 16 (RHC) --The funeral of Rosita Fornés is taking place on Tuesday, June 16, at the Martí Theater in the Cuban capital. Family members, friends, personalities from the cultural area and from civil society organizations are paying tribute to the renowned Cuban artist. The ceremony is being broadcast live on National Television and Cuban Radio.

All the necessary sanitary measures have been taken to guarantee the most worthy tribute to Fornés, who was also a National Theater, Music and Television Award winner. At 10:30 am, the doors to Havana’s Martí Theater opened on Zulueta Street for the public to enter the facility to say goodbye to the renowned performer. It has been done in a way that has enabled compliance with sanitary protection instructions for all Cubans, preserving distance, using the established protection means and respecting the instructions of funeral organizers.

Unfortunately, the conditions for successfully confronting the COVID-19 pandemic have prevented securing mass transportation schedules and force the restriction of traffic on Zulueta Street, from San José to Monte; Dragones, from Prado to Monserrate and Teniente Rey and the same streets, beginning at 6:00 am. Access to the public wound up at 2:00 pm, so that family, friends, cultural figures and civil society organizations can say goodbye to Rosita.

The funeral procession will begin at the Martí Theater around 3.00 pm and will pass through Prado, Malecón and 23 y 12. People will be able to bid farewell to the artist during that journey. The last wish of the so called ‘Vedette de Cuba’, Rosita Fornés, was to rest forever among Cubans, in the family pantheon in Havana’s Colón Cemetery. The ceremony at the cemetery will be private.

On the night of Tuesday, June 16, coinciding with the recognition that the Cuban people pay to health workers every day, Cubans will also applaud Rosita Fornés. The applause from all Cubans, which will be promoted at 9:00 at night by the island’s Television, will be the opportunity for a popular homage in which all people will all participate, given the impossibility of mass participation in the ceremony at the Martí Theater.