Cuban duo advances to the quarterfinals in beach volleyball 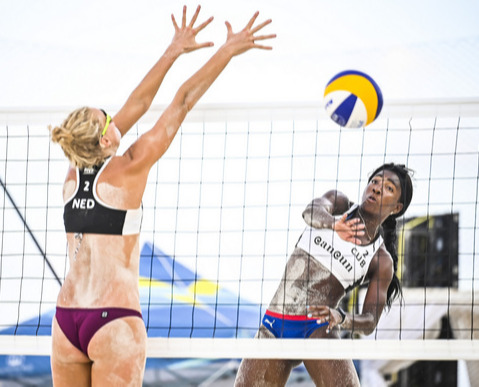 Havana, May 1 (RHC)-- Lidianny Echevarría and Yanileydis Sánchez beat the Netherlands' Sanne Keizer and Madelein Meppelink 2-0 to advance to the quarterfinals of the third phase of the World Beach Volleyball Tour, in the four-star category, the best performance of a Cuban duo in recent times.

In the sands of Cancun, the Cuban team triumphed on Friday night with a 21-16 and 21-18 score against a team they had already defeated in the first stop in the main draw (21-19, 21-17), as did their teammates Leila Martinez and Maylen Delis (Cuba-A).  Both Cuban duos finished ninth in their debut.

The Dutch women had better luck in the second set and took fourth place.  They are ranked among the top 12 in the universal ranking and were ninth in the Hamburg 2019 world championship.

On Friday, the Cuba-B girls triumphed in their first match against Argentina's Ana Gallay and Fernanda Pereyra, whom they had already beaten in the two previous matches.

About the important result against the representatives of the Netherlands, Alain Hernandez, coach of the Cubans, told JIT:  "It was a good game.  We reviewed the two previous games where the tactical plan and the passing did not behave as we had planned.  We adjusted it and the victory came out.  We are all very happy, but we are going for more."