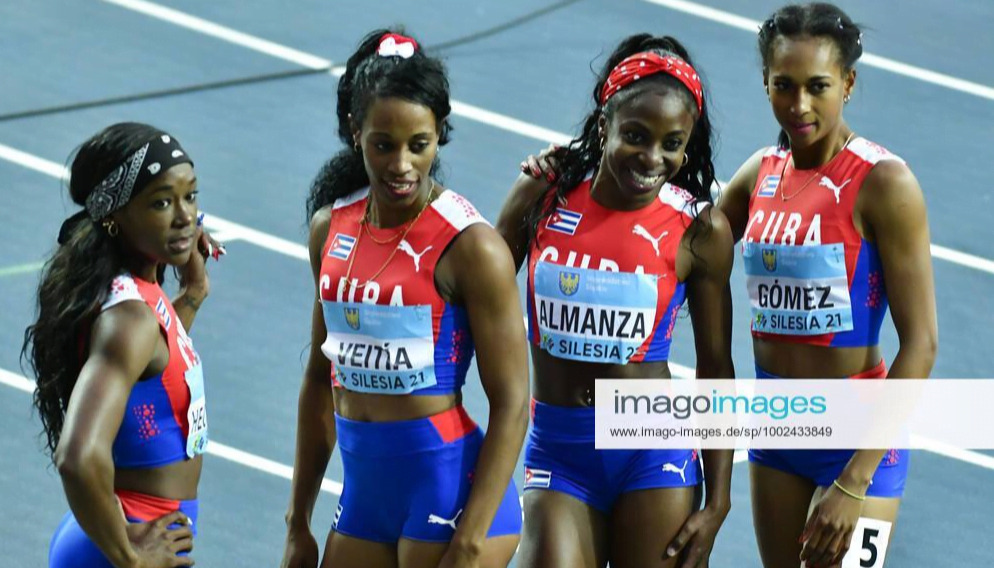 Members of the Cuban relay: Zurian, Veitía, Almanza and Roxana.

Wawsaw, May 2 (RHC)-- The Cuban women's 4 x 400 relay team made history at the World Relays in Silesia (Poland), winning the title and the island's first medal in these competitions.

Aged between 22 and 28, the Cuban squad was an unknown quantity, having only competed once before the world championships and with only three of the girls competing in Silesia-2021.

But on Saturday in the semifinals, they achieved the first goal, by securing the Olympic ticket to Tokyo with the bonus of having the best time among the 8 qualified to the final (3.27.90).

Although on Sunday they all contributed to the triumph, the last sections run by Veitía and Roxana were spectacular, as the students of Ricardo Molina and Francisco Ayala were in third place after the first two sections.

In the third, Veitía accelerated in the last meters and handed over first to Roxana, who did not despair and left the lead momentarily to her rivals, relying on her power and finished off the runners from Poland, Great Britain and Holland in the last 100 meters.

The closest a Cuban 4 x 400 relay had been to the podium in a top-level competition had been in Beijing-2008, when it finished fourth -after the disqualifications for doping of Russia and Belarus-, with 3.23.21, the current national record.

Roxana Díaz, Zulia Calatayud, Susana Clement and Indira Terrero were part of that team.   The time obtained by the Cubans in Saturday's semifinals is their best result in the last nine years, since in London-2012 they ran 3:27.41.

This is the eighth podium finish for Cuba's relays in Olympic or world events, although it is the first for the women's 4 x 400.

"Cuban women continue to make history," he said.  and described the team's victory as an unprecedented event. .

"Zurian, Rose Mary, Lisneidy and Roxana inspire us to dream big for the Tokyo Olympics," he said.