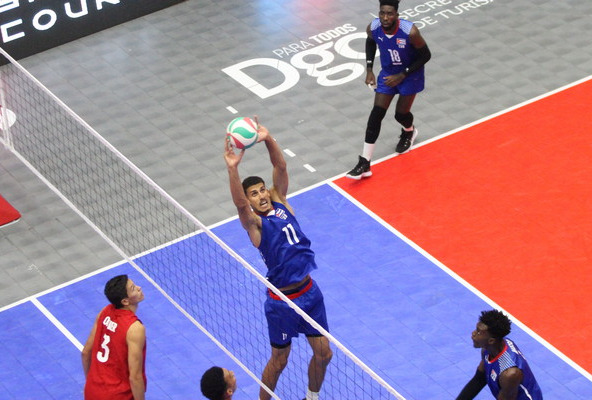 Mexico City, August 21 (RHC)-- The Cuban national team defeated the United States 3-0 (25-23, 25-23, 25-20) and advanced directly to the semifinals by concluding the preliminary round at the top of Group B undefeated on the third day of the Norceca Men's Continental Championship, taking place in Durango, Mexico.

The defending champions on Friday outscored their young rivals in attacks 36-25, in blocks 10-6 and in points on serves 1-0, in a match in which the northerners committed fewer unforced errors (28 to 35).

Cuba's Miguel Angel Lopez was the top scorer of the match with 13 points, including 10 attacks and two blocks, and the only ace of the match, while left-handed opposite Jesus Herrera was the other of the winning team with double digits by accumulating 11 (9-2).

The other players who also played the whole match were the middle blockers José Israel Massó 9 (6-3) and Endriel Pedroso (2 units per attack); the auxiliary attacker Julio César Cárdenas 9 (8-1) and the second passer Lyván Taboada (2 walls).

Entered the court Yohan León, Miguel David Gutiérrez and Tomás Lescay, who in the third quarter got a stripe per attack. Northern center Spencer Olivier was the double-digit scorer for his team with 10.

Captain Miguel Angel Lopez told Norceca's website that "the team showed a high level of play in almost all aspects; we started to let our serve go a little bit, but we stabilized it little by little; also the strong attack and blocking gave us very good results. We are in good shape and happy to be in the semifinals".

Yosvani Muñoz, the technical director, said that "the United States team played very well, it was not easy, but our team showed their qualities, their quality in all aspects of the game, everything went very well."

Meanwhile, the U.S. player Spencer said that "we did a good job putting the ball in play, with good shots. We need to lift the ball more before it hits the floor, those were low effort plays on our part; we will do well and get it right next time".

Their coach Andy Read stated that "Cuba is a very experienced team, with several good players. I think we played better today than yesterday even though the result was not as good. I'm proud of what we executed, we were very close (23-25 in the first two sets), we could have won either set in just one play. We are second in the group, we are qualified to the next round and tomorrow we will play even better".